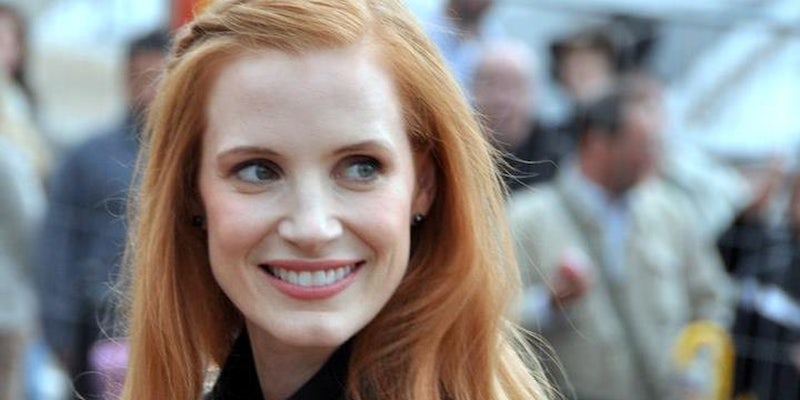 Has the ‘golden age of television’ left women out?

Even if Chastain wasn't cast in True Detective, the rumor is a good sign for the future of cable TV.

The Internet had a minor meltdown last week when Nerdist broke the story that Jessica Chastain would be starring in the next season of HBO‘s much-buzzed-about freshman hit, True Detective. It turned out that they may have jumped the gun a bit, however, as the word from Chastain’s reps and HBO that is that she isn’t “officially” attached to the project at all.

Of course, people have continued to speculate about whether all parties are merely waiting to announce anything until the details are finalized. It’s fitting that a show that has inspired so many rampant conspiracy theories should be shrouded in mystery even behind the scenes, and if Chastain and company are playing chicken, it would certainly explain the caginess of everyone involved.

But even if Chastain doesn’t end up having anything to do with the second season, a move in her direction is a good sign.

True Detective is by far the most buzzed-about new show of the year. Although it’s generated both positive and negative reactions, no other show that’s come out in 2014 has come close to inspiring the same kind attention right out of the gate. Even before there was any official word on the second season, #TrueDetectiveSeason2 took Twitter by storm.

Amid plenty of critical acclaim, the main criticisms of True Detective stemmed from the show’s female characters. To its detractors, they were underwritten, used purely for background material, and just too few in general. Casting Jessica Chastain would be a great call not only because she’s obviously a great actress, but also because it would ensure a larger, more important female presence in the show’s second season.

True Detective creator Nic Pizzolatto has already stated that the next season of the show will involve “hard women, bad men and the secret occult history of the United States transportation system.” If you’re thinking this sounds like some kind of strange joke, your response is completely understandable. It could, perhaps, be that Pizzolatto is just speaking in the same kind of cryptic philosophy that his protagonist Rust Cohle talks in.

But occult transportation aside, the idea of adding some “hard women” to True Detective, season 2 isn’t a bad one. Pizzolatto has already proven he can write “bad men,” but his ability to craft hard women, much less any kind of woman, is a different story. And if Pizzolatto wants to show he’s more than just a one-trick pony, then creating strong female characters will be an essential part of True Detective’s future.

This is also a chance for Pizzolatto to lead this supposed “golden age” of television in an important new direction. It’s no secret that so far, the major shows of this period have all been very male-centric. Most of them have also featured darker, less traditional protagonists. But after a decade of this, many viewers are unsurprisingly experiencing a certain amount of anti-hero fatigue, or rather male anti-hero fatigue, to be specific. The desire to see women get the same kind of complex leading roles has become palpable.

And that desire may soon be fulfilled. Many of the most-hyped new shows arriving next season will be structured around strong women, including How to Get Away with Murder, State of Affairs, Madam Secretary, and The Mysteries of Laura.

The only problem is that these shows will all be on network television, while most of the truly compelling characters to come out of television’s recent creative revolution have been on cable.

For True Detective, this could mean two things. First, that network television might actually surpass cable when it comes to creating complicated female characters, and also that it doesn’t have to if Pizzolatto and his cable peers decides to lead the charge in writing the kind of memorable parts for women that in the last decade have mostly gone to men.

But creating iconic female heroines isn’t just about networks; it’s about genres. With women increasingly taking center stage on TV overall, True Detective also has an excellent opportunity to lead the way in its own genre: the serialized crime series.

Sure, there have been a handful of crime shows in the last few years that featured complicated female leads. Broadchurch, Top of the Lake, The Fall, The Bridge, The Killing, Those Who Kill, and Prime Suspect come to mind.

But the one thing all those shows have in common, besides putting women at the forefront? None of them are American. Yes, most of them have been remade (or are currently being remade) to varying degrees of success, but that doesn’t change the fact that most beloved and distinguished crime series up till this point in history, especially in the U.S., have revolved around men.

Some of this is probably due to the fact that culturally, we still largely view law enforcement as a man’s job. But while women remain as unfortunately underrepresented in law enforcement as they are in many other professions, there is absolutely no evidence to suggest that they don’t make good police officers.

On top of this, if television is going to persist in depicting violence against women (as the first season of True Detective did, along with many shows that came before it), doesn’t it make sense to involve some actual women in that depiction? Everyone who’s been paying attention understands by now; it’s a violent world for women. But that’s why only letting men dominate these stories isn’t good enough anymore. The traditional depiction of heroic men protecting beaten-down women is too simple.

A large percentage of violent crime in this country is directed toward women; there’s no getting around it. But to convey stories about this sad truth honestly and effectively, women can’t just be used as props in them.

Although most would probably think of it as a fairly traditional piece of network television, it’s worth taking a moment to consider something like Law & Order: SVU. Say what you will about the way the show portrays sexual violence or about the merits of serialized dramas versus procedurals in general, but it’s unlikely SVU would be going into its 16th season without Mariska Hargitay leading it, talking to the various victims week after week. Empathy is a huge part of being a good cop, and women traditionally have more of it than men.

For television to continue to be as innovative as we want it to be, the next part of the equation will also involve including more female showrunners, to write a new crop of memorable leading women (or men) themselves.

This is the kind of character Chastain is more than capable of playing. Let’s just hope that Pizzolatto is capable of writing her.