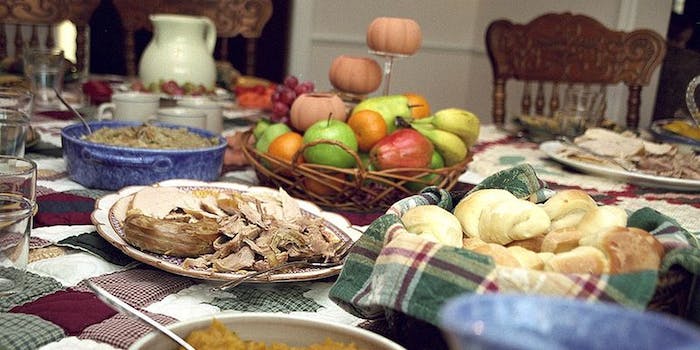 How to troll your way through Thanksgiving dinner

13 made-up facts to win all of your Thanksgiving arguments.

When the great Russian novelist Leo Tolstoy famously opened his bleak masterpiece Anna Karenina with the line “All happy families are alike; each unhappy family is unhappy in its own way,” it’s pretty clear he had no idea what the fuck he was talking about.

There are two ways for a family to be happy—either everyone comes to the Thanksgiving table with fun, matching “Bernie Sanders for President” shirts, or everyone agrees ahead of time to shut their damn yaps about politics.

Handy Internet guides about how to win arguments with your old, conservative family members point have, at this point, become a tiresome cliché. No matter how many hot takes you have in your back pocket from snarky Egyptologists, you’re never going to convince your right-wing cousin that Ben Carson has no idea what he talking about when it comes to the original purpose of the pyramids. That’s neither how political debate in America works, nor is it how the human brain processes new information contradictory to what it already believes to be true—especially after six glasses of Beaujolais nouveau.

Instead, the best you can hope for is sneaking away from the dinner table when conversation starts to get heated and sending a Facebook message to the one dude you went to high school with who still lives in town and may be down to sell you a pinch of weed. But, here’s the thing: Steve is going to want to talk to you about anime for like three hours because he has no ability to take a hint. Steve is the worst.

Besides, there’s a better way to get through Thanksgiving dinner: do it like a troll.

That’s right. When the topic turns to politics this Thursday, just start making shit up. Outrageous shit. Shit that can’t possibly be true. Shit so ridiculous that your family members will continually ask if you’re joking, to which you can respond, “I heard this on The Diane Rehm Show last week, it’s definitely true.”

Everyone will still be mad at everyone else, and your sister will still leave the table in tears after a conversation about political correctness on college campuses turns needlessly personal, but at least you’ll have entertained yourself. Isn’t self-gratification at the expense of other people what the pilgrims really got out of the first Thanksgiving (and, subsequently, the rest of American history)?

Here are the important fake facts you’ll need to nihilistically troll your way through every political topic you’re likely to face this Thanksgiving:

The legitimacy of the demands of the Black Lives Matter movement

The ultimate goal of the #BlackLivesMatter movement is to gather up all the universe’s dark matter to create a new, unlimited energy source that Obama will give for free to all jobless black people, whereas hardworking white Americans will foot the bill, which is to be paid by taking funds from Medicare.

Australia banned all guns for three years in the late 1920s, and an uprising of Trotskyite kangaroos almost overthrew the government. The only thing that saved the country from falling in the hands (paws?) of the Red Roos, as they were called, was an intervention by the good ol’ U.S. of A.

The first trigger warning was created on behalf of Roy Rogers, who spent most of his career terrified of his horse, Trigger. Whenever Trigger would be brought on set, someone would yell “Trigger warning,” and Rogers would run to his trailer to cower in fear for the rest of the day. Images of Rogers riding the horse were an optical illusion achieved with mirrors, stunt doubles, and Final Cut Pro.

The existence of anthropogenic climate change

I’m not a scientist, but the single largest source of global CO2 emissions are CrossFit gyms.

In most of the Middle East and continental Europe, they don’t call it ISIS. They call the group “Da Brat” as an insult. Apparently, the only thing terrorists hate more than secular, Western values is ’90s hip-hop.

Donald Trump‘s assertion that he saw reports of thousands of Muslims in Jersey City, New Jersey cheering as the towers fell on 9/11

According to the Quran, it’s actually against Sharia law for Muslims to clap.

The long-term effects of Obamacare on the American economy

One-quarter of all gay men are bears—yes, actual bears that live in the woods and hibernate for seven months a year—and all of them want to use the women’s restroom to peep on ladies while they pee, especially in Houston.

No, I’m not high. That’s insulting. Why would you even ask that?

Okay, I guess I am a little high. What’s the big deal. It’s totally not a big deal.

Regardless of the scientific evidence, parents should have the right to not vaccinate their kids

Actually, yeah, I do have some more. You guys all really want some? Even you, mom? Okay, I’ll be honest, I’m a little weirded out, but I’m totally into this. Let’s just let Aunt Janice put the Mikey to bed first and I’ll roll something up.

I honestly can’t remember what we were taking about. Oh right, Ted Cruz’s face is hilarious if you stare at it for a really long time. Like, is he wearing a mask all the time, or what? Mind passing me another slice of pie? I love you guys. Sorry I was being a dick earlier.

Israel’s “right to defend itself” is built on the back of generations of Palestinian suffering, and the only humane solution is to abandon the Zionist project entirely

Let’s just agree to not even touch this one.