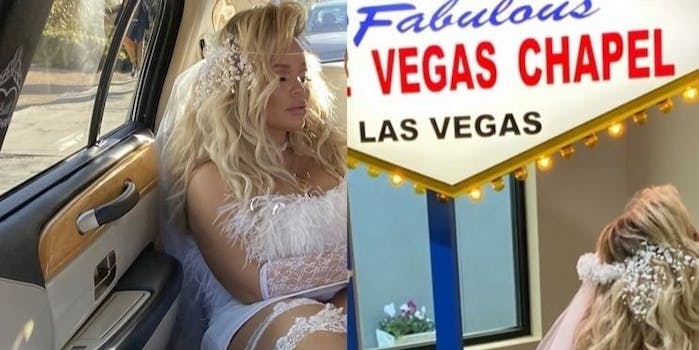 YouTuber Trisha Paytas declares she got married to someone. But did she? (updated)

She hasn't posted any images of her spouse.

Trisha Paytas isn’t legally betrothed to anyone. But that hasn’t stopped the controversial YouTube star from declaring that she got married to an unnamed person in Las Vegas over the weekend.

Clark County, Nevada marriage license records show that nobody named Trisha Paytas has obtained a marriage license in the last month. But her Instagram page is filled with photos that show her supposedly getting married at a wedding chapel and the aftermath of that supposed event in Las Vegas.

The ordeal is reminiscent of the fake Las Vegas marriage between Jake Paul and Tana Mongeau.

On Saturday, Paytas—who has 1.36 million subscribers on YouTube and 2.4 million followers on Instagram—posted a photo of herself in a white dress and wrote, “also I’m a bride or whatever today[.] I’m most excited for the cake #WeddingGlam”

She followed that up with a photo of herself wearing a “Future Mrs.” jacket with the last name blurred out.

While she posted multiple images of her posing with the magician (and one photo with prop comic Carrot Top), there is no evidence of who Paytas’ spouse might be.

Paytas has been embroiled in plenty of YouTube drama in the past six months, so it’s no surprise that her fans are wondering about her supposed nuptials.

Last May, Paytas was blasted by much of the internet for her interactions (and her eventual ghosting) of a popular YouTuber named Nikicado Avocado. Earlier that month, Paytas was called out and body-shamed by Ethan Klein for manipulating her Instagram photos, and PewDiePie later piled on by calling her a liar.

Last month, rumors spread again that Paytas had once dated director Quentin Tarantino—it’s not true—and she received even more backlash when she claimed she was a trans man.

“I like guys, but I also identify as a guy,” Paytas said in a 15-minute video.

Now, she’s turned the online conversation about her to her wedding vows. On Sunday, she tweeted that she might post a “real video” from her supposed marriage ceremony.

But don’t be shocked if Paytas—like Paul and Mongeau, who received all kinds of media coverage for their fake wedding—didn’t actually get married at all.

Update 7:38am CT, Nov. 6: Turns out Paytas didn’t marry a living, breathing person after all. Instead, she made her commitment to a cardboard cutout of Brad Pitt.

Her newest video shows a photographer taking snaps of the lifeless Pitt in a chapel before a giggling, smiling Paytas appears. After she exchanges rings with Pitt (it’s actually somebody standing behind the cutout who acts as Pitt’s arms), she says her vows. Pitt, meanwhile, remains silent as the Elvis impersonator continues on with the ceremony, which includes lighting a unity candle and saying “I do.”

She then, um, French kisses the cutout to seal the ceremony. It’s really something.