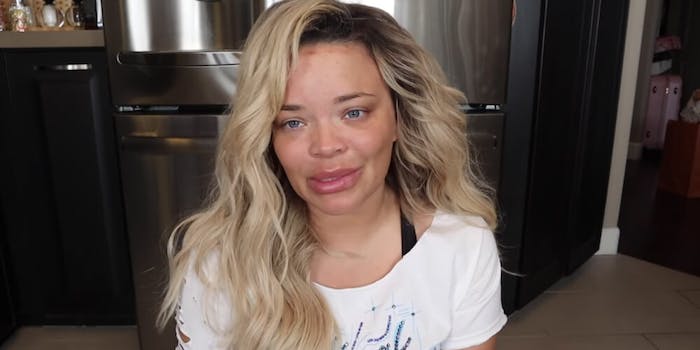 'I like guys, but I also identify as a guy.'

YouTuber Trisha Paytas is under fire for claiming to be a transgender man in a new video, released on Monday. In the video, titled “I am transgender (female to male),” Paytas claims that she is a trans gay man.

“I like guys, but I also identify as a guy,” Paytas explained in the 15-minute video.

To try to convince fans of her identity, the YouTube star went on to list the myriad of reasons why she believes she is a gay trans man and not a woman.

“I’ve always been attracted to guys but not straight guys,” she said. “In my head, I feel like I’m a transgender female to male, but also a drag queen.”

She went on to explain that like men, she only craves being the center of attention when she wants to be and not all of the time and that she prefers to dress down, rather than be girly and always wear makeup. Like gay men, she argued, she likes “glam” and “voluptuousness.”

“I always had penis envy,” Paytas revealed. “I just always thought my life would be easier if I had that part.”

Though Paytas openly admitted that she doesn’t “go out and advocate” for the trans community, she thinks she would be the right candidate to do so. “I should be the advocate for it,” she said.

She also wants fans to know that despite her history of trolling viewers on similar subjects–like once claiming to be bisexual–she is serious about being a trans man.

Yet, people were not convinced and backlash quickly ensued, with many taking up issue with the arguments she presented to explain her reasoning behind coming out as a gay trans man.

“Just opened YouTube and saw Trisha Paytas say she identifies as a trans man because she finds gay men attractive,” Twitter user @TS7Track3 wrote, along with the relatable meme of YouTuber Nicole Tv looking up and down at her phone.

Other users accused her of seeking attention with her new video.
“Trisha Paytas when she decided to disrespect the entire LGBTQ community for clout because she wasn’t getting enough attention,” Twitter user @grandlandis wrote, along with a clown meme.

trisha paytas when she decided to disrespect the entire LGBTQ community for clout because she wasn’t getting enough attention pic.twitter.com/DuTNqwiMYI