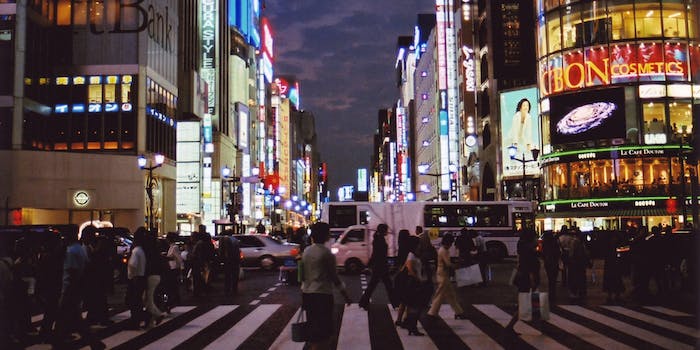 Too much advertising is bad for everyone—even advertisers

In the Internet age, blank space is becoming endangered.

Last week, the Charlotte Hornets announced that they would be moving the trademark NBA logo to the back of the team’s jerseys, ahead of a league-wide switch set to take place within the next two years. Although league officials called it a “stylistic move,” insiders believe this is the beginning of the league’s long-promised plan to bring corporate advertising to NBA jerseys.

For sports fans, this shouldn’t be surprising, as soccer has long allowed advertisements on players’ uniforms. It’s yet another move in making professional sports into a real-life Fahrenheit 451, so crowded with corporate sponsorship that its altered the very structure of athleticism. In 1994, only one baseball team, the St. Louis Cardinals, had a team named after a corporation; today, all but nine (arguably eight) MLB stadiums are named for their corporate sponsors.

Rather than a cause, sports’ corporate ubiquity is a symptom of the larger proliferation of advertisements in society, a system that mistakes repetition for impact. In the 70s, people could expect to see around 2,000 advertisements every day, but today that number has skyrocketed—safe estimates suggest that we take in at least 5,000 images each day, most of which we aren’t even aware of.

In the classic age of television viewership, with families huddled around the TV set like a fireplace, consumers would have been digesting a large portion of their advertising intake through commercials. However, as both television viewership and our broader culture move online, advertising has adapted to the new digital age by increasingly making marketing public, part of the fabric of daily life—from advertorials to digital billboards and product plugs in our favorite shows.

A 2007 article in New York Times shows just how desperate corporations have become in filling the engagement gap when it comes to advertising, finding consumers where they are if not in front of their TV sets.

This led Story to conclude that blank space should be “[added] to the endangered list,” but how much do we really benefit from the wholesale of the public sphere? What are we getting in the trade-off? The answer might be very little, as product placement has become so pervasive that we often train ourselves not to see it. Just because ads are anywhere the eye can see doesn’t mean it’s likely we’re engaging.

In the case of online advertisements, a war has raged over whether Facebook and Google’s targeted ads are nearly as effective as the companies suggest. Who even clicks on those banner ads anyway? The Atlantic’s Derek Thompson called such potentially wasted ad space the “Wanamaker Paradox,” named for nineteenth-century retailer John Wanamaker’s famous statement: “Half the money I spend on advertising is wasted, the trouble is I don’t know which half.”

“Today, marketers are grappling with [their own] Wanamaker Paradox: The more we learn which half of advertising is working, the more we realize we’re wasting way more than half,” Thompson wrote. According to Thompson, Internet ads (which are based on users’ previous behavioral patterns online) are best at targeting people who were already going to buy that product eventually, rather than generating excitement in a vacuum.

“Maybe Facebook has mastered the art of using advertising to convert sales,” he continues. “Or maybe it’s mastered the art of finding people who were going to buy certain items anyway and showing them ads after they already made their decision. My bet is that the answer is (a) somewhere in the middle and (b) devilishly hard to accurately measure.”

Whether or not Facebook has revolutionized the modern ad experience, Slate’s Jordan Weissman argues that most of the data we have on the subject is “useless.” Whereas TiVo once allowed television viewers to fast forward over ads, YouTube users can always click to another window to escape those annoying VEVO ads. Just because technology has gotten smarter about catering an experience to us doesn’t necessarily mean it’s all that effective. On Slate, Farhad Manjoo calls it advertising’s “uncanny valley.”

We may never know just how negligible the benefits of today’s advertisements are, but the costs of our society’s ad ubiquity are well-documented. The problem is we are not always conscious of what we are consuming, as decades of psychological persuasion have focused on imprinting ads onto the subconscious mind.

As The Guardian’s George Monbiot argued, the modern consumer is, thus, offered the illusion of capitalism inside a digital cage. “Advertising claims to enhance our choice, but it offers us little choice about whether we see and hear it, and ever less choice about whether we respond to it,” Monbiot wrote. “Since Edward Bernays began to apply the findings of his uncle Sigmund Freud, advertisers have been developing sophisticated means of overcoming our defences.”

According to Monbiot, humans are not “born with values”—these ideas “are embedded and normalised by the messages we receive from our social environment,” ones furthered by our corporate mediascapes and research has shown how toxic many of these osmotic ideals are.

However, when it comes to children under six, who often aren’t aware of the difference between commercials and regularly scheduled programming, British developmental psychology researcher Dr. Mark Blades goes further: he believes that we should block advertising from kids’ shows altogether.

Blades’ solution sounds extreme, but cities like Sao Paulo show there can be a huge potential benefit from regulating advertising’s negative externalities. In September 2006, Sao Paulo passed a “Clean City Law,” one that stripped the metropolis of its 15,000 billboards, as well as advertisements on transit and in front of stores. According to Mayor Gilberto Kassab, “the Clean City Law came from a necessity to combat pollution…pollution of water, sound, air, and the visual. We decided that we should start combating pollution with the most conspicuous sector—visual pollution.”

Although the bill’s critics suggested it would gut local revenue, losing Sao Paulo $133 million in ad dollars, the measure has been hugely popular among the city’s residents; a 2011 survey boasted an overwhelming 70 percent approval rating for the bill.

If there’s been one drawback from the move, it’s that in exposing a beauty that had long been obscured behind Sao Paulo’s pervasive advertisements, the city’s cracks became apparent. “Shantytowns that pepper the city’s streets, once hidden under massive signs, revealed gross inequalities,” wrote the New Dream’s Amy Curtis. “But bringing the situation to light incited residents to improve conditions and begin discussing solutions. No longer could actual problems be masked by artificial solutions.”

Constant advertising might seem like the solution to fund the high costs of sustaining sports driven by colosseum-size stadiums, but too much advertising is bad for everyone, even the advertisers. Banning outdoor advertising didn’t force Sao Paulo’s businesses underground; they got creative, launching “public stunts or viral campaigns on the streets” and rebuilding relationships with consumers.

Many, like Bleacher Report’s Soven Bery, have wondered if the largesse of institutions like the NBA and the NFL make them “too big to fail.” Building arenas designed for wall-to-wall advertising means massive amounts of short term cash flow, but for how long? Ubiquity might be the new exclusivity, but the problem with blank space is like any other environmental issue: eventually it all gets used up. Left unchecked, it just becomes waste.

Photo via ricoeurian/Flickr (CC BY 2.0)