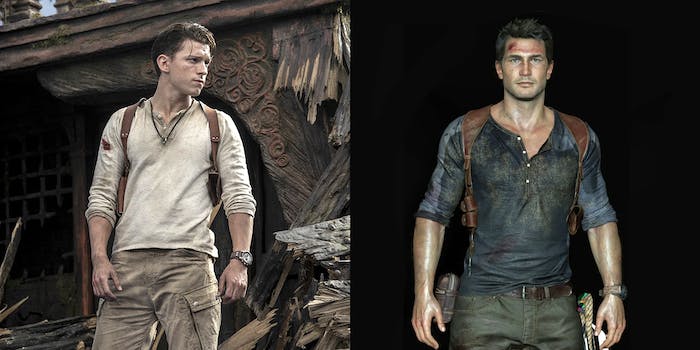 It feels like we’ve been waiting forever for an Uncharted movie, but now it’s finally happening. Starring Spider-Man‘s Tom Holland, the live-action Uncharted adaptation is now in production—and we just got our first look.

Tom Holland posted a photo of himself in costume as Uncharted‘s treasure-hunting hero Nathan Drake, and he looks great! He skews a little younger than Drake’s usual depiction, but the costume is definitely on point: A faded henley shirt, leather shoulder holsters, and a necklace with a coded ring that Nathan Drake inherited from his ancestor, the iconic British explorer Sir Francis Drake.

Nolan North, the main voice and motion capture actor from the Uncharted games, also posted some photos from the movie set, where he visited Tom Holland during filming.

Directed by Ruben Fleischer (Venom) and written by Art Marcum and Matt Holloway (Punisher: War Zone), the Uncharted movie will serve as an origin story (surprise surprise!) for the young Nathan Drake and his mentor Victor Sullivan (Mark Wahlberg). Various iterations of the movie have been stuck in development hell since 2008, with Wahlberg at one point attached to play Drake himself.

The story will take inspiration from Uncharted 4: A Thief’s End, which involves Nathan Drake hunting for the pirate Henry Avery’s buried treasure. The film’s main challenge will be launching the Uncharted franchise in a way that feels distinct from Indiana Jones, Tomb Raider, and their assorted ripoffs. Its release date is set for July 2021, but as we all know, that could definitely change.