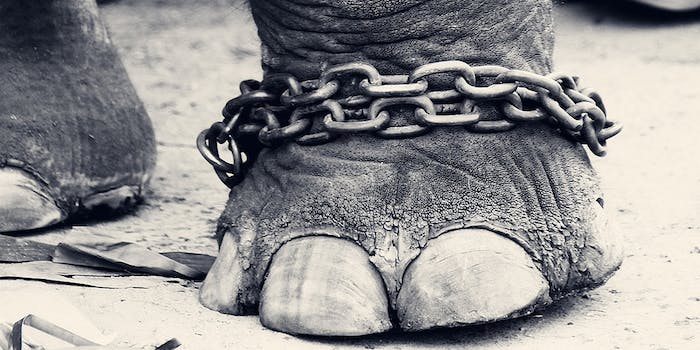 It's time to find some different metaphors.

Perhaps you’ve seen the current T-Mobile ad making the rounds, set to “New Direction” by Black Lips. The “Break Up With Your Carrier” ad starts with a striking visual image of a pair of arms in chains, which snap apart as the ad opens, implying that T-Mobile will usher cell phone owners into a new realm of freedom from the slavery of T-Mobile’s oppressive rivals. Print ads are also using the visual, along with ball-and-chain imagery of innocent mobile phone customers tricked into terrible contracts with awful terms.

Apparently paying way too much for a data plan is equivalent to human trafficking, at least in T-Mobile’s eyes. The flashy, bright ads are clearly designed to appeal to a youth demographic but are they striking the right tone for the audience? This generation is much more aware of social issues than those that went before, and one might argue that slavery metaphors are a bit out of touch with the sensibilities of young, urban residents looking for easy, low-commitment phone contracts. (Especially given the high rate of young, Black engagement in mobile technologies.)

Yet, perhaps we shouldn’t be surprised by the slavery and prison metaphors embedded in T-Mobile’s advertising, given what the company’s CEO recently said at a press event. Speaking as a representative of the company in a room filled with eager audience members, John Legere described AT&T and Verizon as “high and mighty duopolists that are raping you for every penny you have.”

Because being an AT&T or Verizon customer is precisely like being sexually assaulted.

This slangy use of “raped” is, of course, nothing new; it’s popular among certain communities of youth to describe any situation in which someone is being taken advantage of, or in which someone is asserting dominance and power. “I really raped that test last week” or, in a gaming context, “I totally raped that guy” are two such examples. The use of “rape” as a casual word for describing something other than sexual assault is offensive to many, and it’s telling that Legere felt the need to use it at a press conference.

Legere claims to be a man of the people, connecting more with customers of the service than company higher-ups, and is notorious for liberally sprinkling profanity, off-color phrases, and inappropriate commentary into his speech when repping T-Mobile. He’s trying a bit too hard to pretend to be one of the kids, but he’s not actually sure who the “kids” are and which demographic he’s targeting. What some people might view as unprofessional, Legere considers it an asset: “I may be a little rough and crude, but I’m much more like my customers and employees than I am an executive. I think employees relate to the way I speak, customers relate to exactly the way I think and talk. And it’s who I am.”

Legere believes the line is for other people, but at some point, he has to collide with the reality of the fact that the line is there for a reason—especially for the leaders of major corporations, who aren’t just representing their own views, but those of the companies they lead. Should the CEO of a major phone provider really be referring to rivals as rapists? And will T-Mobile hold him accountable for his words? (Especially in light of the feminist Internet firestorm that is likely brewing even as we speak.)

One might hope that T-Mobile would see the problem with Legere’s comments and take appropriate action—but not necessarily. Thanks to the acceptance of “rape” as a casual slang term and Legere’s own hyper-aggressive personality, which he’s used to build up a personal brand, the company may give him a pass. Moreover, the company’s approach to advertising and PR in the past certainly hasn’t suggested that its public relations and marketing departments are concerned with perceptions of being insensitive or inappropriate—a company that uses slavery metaphors in its advertising likely won’t be too ruffled by criticisms of its CEO using a rape metaphor.

One wonders what the workplace culture is like at T-Mobile, and how it feels to be an employee of the company who’s bothered by the CEO’s behavior. Acceptance of rape culture in the workplace is a documented issue for women across industries, but especially in tech, where some company officers seem to take pleasure in reminding women that they don’t belong. For at least some of the female programmers, engineers, and other personnel at T-Mobile, it must be frustrating to hear the company’s CEO casually throw words like “rape” around in reference to anything other than sexual assault.

While Legere says that employees relate to him, this might not be truly a function of employees feeling comfortable and at ease around him. More probably, it seems that at least some employees must swallow discomfort and focus on getting through interactions with the company’s bombastic CEO in order to retain their jobs and not attract unwanted attention. Certainly working conditions at the company don’t sound as rosy as Legere seems to want to paint them.

At a T-Mobile call center in South Carolina, for example, employees are actually discouraged from filing sexual harassment claims—and without the presence of a union, they have little protection if they speak up. They also work long hours for minimal pay in conditions that have been compared to a sweatshop.

Life at T-Mobile doesn’t sound so fun, free, and high-spirited now, does it?