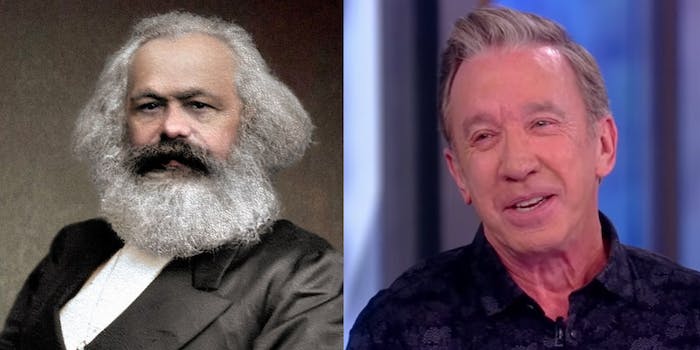 Seth Rogen took the opportunity to remind Allen of his two-year prison sentence for drug trafficking.

Hollywood actor Tim Allen may have inadvertently spawned a new meme on Friday after sending out a bizarre tweet about “Carl Marx.”

The tweet from Allen, the conservative actor behind such roles as Toy Story’s Buzz Lightyear, has since been shared more than 29,000 times.

Allen followed up by correcting his spelling mistake before opining on what he felt Marx’s reaction would be to 21st century America.

“I am sure Mr Marx would have made adjustments to his position had he been exposed to our country’s advanced evolution of worker unions and our protection of child labor,” Allen said.

But Twitter users latched on to Allen’s initial tweet and created equally confusing tweets of their own in return.

Countless users used the opportunity to remind Allen of his two-year prison sentence for getting caught with 1.4 pounds of cocaine in 1978.

“What are three things you like less than selling cocaine?” actor Seth Rogen replied.

Others joked that Allen’s tweet was an endorsement of Marxism, praising the actor for his bold stance. “Welcome to the resistance, comrade tool man,” @planetofdeer said.

We can only hope Allen returns soon with another equally confusing and meme-worthy tweet.