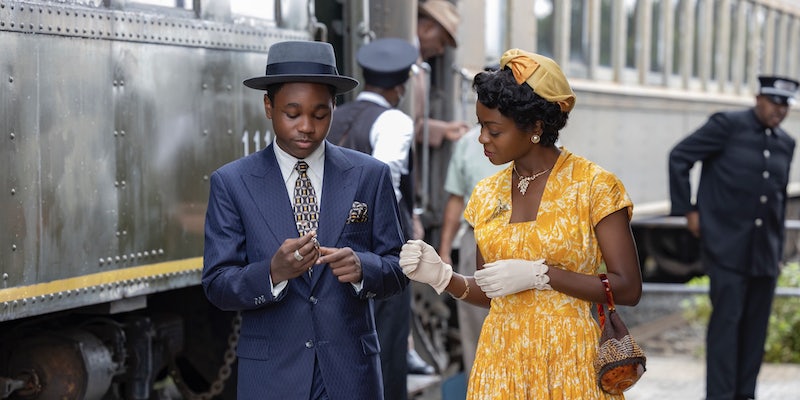 Spearheaded by a great Danielle Deadwyler performance, ‘Till’ takes great care with its subject matter

It avoids many of the pitfalls in similar biopics.

Till is a painstaking effort in cautiousness. Writer-director Chinonye Chukwu (Clemency) is specific about what we see and what we don’t, and more often than not, she uses close-ups to give us a more intimate connection. What might’ve been an instance where one could fully exploit the story to make its larger point (something that many people feared would also be the case for Till), Chukwu zooms out.

Release Date: Oct. 14, 2022
Director: Chinonye Chukwu
Release: Theatrical
Infused with an incredible performance from Danielle Deadwyler, ‘Till’ takes great care in depicting the murder of 14-year-old Emmett Till and his mother’s fight to make the world witness what happened to him.

In some ways, Till feels like a conventional biopic and falls into some narrative clichés, even as it handles its subject matter with care and respect. But what elevates Till to another level is an astounding central performance by Danielle Deadwyler (The Harder They Fall, Station Eleven) that not only grounds the film but makes many of the concerns about clichés and convention fade away.

The groundwork for that is evident from the very beginning. Well before the events leading up to the death of 14-year-old Emmett Till (Jalyn Hall) and what his mother Mamie (Deadwyler) does afterward to make the world witness what happened to him, we’re shown a very different side of their relationship. In 1955 Chicago, we see Mamie dote over her son, who she affectionately calls Bo or Bobo (a nickname that stuck from his infancy), who’s allowed the depth to be more than just a symbol of the civil rights movement his death would help inspire.

He’s a curious and happy kid who will sing along with the radio or perform for his family in front of the TV. (One thing evident throughout the script, Hall’s layered performance, and some of the production design is the emphasis from most of the characters—apart from the white people who slandered him after his death—is that Emmett Till is a boy.) And he’s excited to visit his cousins in Mississippi, an upcoming trip that terrifies Mamie: Before her son leaves, she tells him multiple times and in multiple ways to make himself small and to be careful because of how dangerous it might be for him to be Black in the south.

Much of what happens next is largely known, from Emmett’s interactions with Carolyn Bryant (Haley Bennett) at a grocery store in Money, Mississippi to Emmett’s lynching a few days later. But the care comes in the camera work: When Roy Bryant and J.W. Milam come to kidnap, the focus is on Emmett and his family while the faces of his killers are obscured. Our look at the trucks that took Emmett away shows that white men weren’t the only ones who had a hand in Emmett’s murder. In one of Till’s more devastating scenes, the camera lingers instead on a cabin shot from a distance as small snippets of sound play at a distance instead of depicting the violence that took place that night.

By framing the events from Mamie’s point of view, Till conveys the tragedy but also the determination. Deadwyler gives each aspect of the complex set of emotions Mamie experiences as she goes from an apolitical single mother who wants to see her son come home to being thrust into the spotlight.

Sometimes, the work is subtle—a look or a lip quiver—as Mamie processes a new development, initially resists the call by others around her (both family and civil rights activists) to become an activist herself, or fights to bring her son back home to Chicago to bury him. Other times, Deadwyler is explosive, and when Mamie embraces a larger role, Emmett remains her focus. A monologue toward the end of the film that sees Mamie being put on trial as much as the men who killed her son is particularly striking.

Till’s story, both the film itself and its postscript reminds us, wasn’t that long ago. The federal anti-lynching bill in the works mentioned in passing won’t get passed until March 2022, 67 years after Emmett’s lynching. Just two months before Till’s theatrical release, a grand jury in Mississippi declined to indict Carolyn Bryant—the woman whose actions and false accusations led to a 14-year-old boy’s death, his name dragged in the mud, and for her husband to get away with murder—after Emmett Till’s relatives and researchers found an unserved warrant for her arrest from August 1955.

“I want America to bear witness,” Mamie says of the decision to give Emmett an open-casket funeral. Even with the amount of care taken with the subject matter, Till isn’t an easy watch, although it sometimes can feel like a story we’ve seen before. But in a way, it too bears witness.

Till arrived in select theaters on Oct. 14; it opens nationwide on Oct. 28.