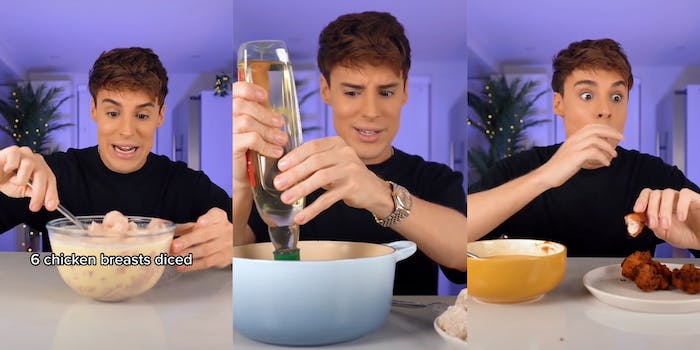 'I was shocked honey.'

Popular TikToker @raphaelgomesx alleges fast-food chain Chick-fil-A is suing him after he claims to have re-created their chicken nugget recipe in a TikTok video.

The original video posted three days ago shows @raphaelgomesx making chicken nuggets and breaking down what he calls the “Chick-fil-A chicken nugget recipe.” The video, amassing over 13.4 million views and 2.9 million likes, starts with a voiceover announcing: “A Chick-fil-A employee leaked this video the day they quit the job” with the chicken nugget recipe written down on paper in the background.

@raphaelgomesx is a popular online content creator with over 403,000 followers and 9.3 million likes on TikTok, and over 2.3 million subscribers to his eponymously named YouTube channel. Most of his content centers around recreating viral recipes and online food challenges.

The TikTokker followed up 19 hours ago with a video alleging he had to pay $10,000 in lawyer fees because Chick-fil-A is pursuing legal action.

Captioned “THIS IS WHY I TELL U TO DOWNLOAD THE RECIPES,” the video amassed over 2.5 million views and 254,000 likes.

The video shows @raphaelgomesx making shocked faces at a lawyer bill with all the information blurred out except the amount and date. A “NeNe Leakes” voiceover announces “What is this, honey… I was shocked honey, I was in tears almost.” The video implies that @raphaelgomesx must pay close to $10,000 in lawyer fees to protect himself due to Chick-fil-A suing him.

He’s done similar viral TikTok videos for KFC chicken as well. Viewers seem to believe him but it’s unclear if he actually has the recipe in question.

We’ve reached out to Chick-fil-A and @raphaelgomesx for comment.