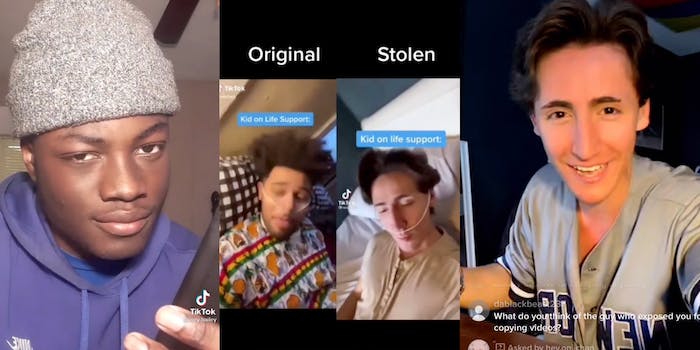 'This dude already had like a million followers, yet was stealing from so many other creators who were a lot smaller than him while giving zero credit.'

Popular comedy TikToker Kane Trujillo, known as @neumane on the app, has been accused of stealing content from smaller creators.

Joey Bailey, known as @joey.bailey on the app, posted a video on March 15 showing side-by-side comparisons of Trujillo’s videos and other creators’ content. The former were featured under the label “stolen” and the latter were labeled “original.” The seven TikTokers whose “original” videos were allegedly “stolen” include @nuhchez, @ty_t.v, @brodiefalgoust, @dawson.taylor1, @licout, @lemmuelmamotsau, and @joey.bailey. Trujillo’s videos are nearly identical to theirs. The Daily Dot confirmed that all of the videos under the “original” section were posted before Trujillo’s similar videos.

Trujillo has over 2.7 million followers, and his videos garner millions of views. All creators but @nuhchez have over a million fewer followers than Trujillo at the time of this article’s writing.

“This is something I’ve come to accept because sadly TikTok is an app that will push stolen content and Suppress originality!” Natchez Ballinger, known as @nuhchez, told the Daily Dot in an email. “Creators have stolen from me since I’ve joined the app, I take it as flattery in a way.”

“I mean yeah he did steal my video and it became more popular but it’s TikTok,” Dawson Anderson, known as @dawson.taylor1, told the Daily Dot via Instagram. “I don’t really care all that much it’s a video trend not worth crying over.”

“The thing with him is that he doesn’t steal ideas, he steals the video word for word, uses the same sound, the same gestures, and even the same wording without giving any credit to the creator whatsoever,” Brodie Falgoust, known as @brodiefalgoust, told the Daily Dot via Instagram. “That is how he gained all of his following, and continues to do it still (even after being called out). I get ripped off all the time but It’s frustrating as a smaller creator who is constantly coming out with original content when a person with a big following comes and takes credit for your originality.”

“People take my ideas but any creator that has been bigger than me has given me credit!” Falgoust added.

Another creator whom Trujillo is accused of stealing content from also expressed frustration over his apparent lack of attribution. The creator decided to remain anonymous out of fear of legal retaliation.

“There is large difference between following a trend and ripping off someone’s work shot for shot and word for word,” the creator said in an email to the Daily Dot. “A lot of users do not understand how much work some of these creators are putting into original content. And for Neumane to hunt down those smaller creators and reproduce their successful content as his own without acknowledging credit is exasperating. The real issue becomes the money and opportunity he is being given by eating off of the backs of others.”

The creator also said that Trujillo had seemingly attempted to claim their original idea as his own in the comments of his video.

“When I was first made aware of my idea being stolen, I was annoyed, but was not upset until I saw the lengths that he had gone to in order to bury any connection to my original post as well as him claiming to have come to the idea on his own within his comment section,” the creator said.

The public’s reaction to Bailey’s TikTok video was mixed. Some commenters agreed that it is wrong to lift other creators’ jokes without attribution, while others argued that copying is to be expected on the app.

“Bruh this platform is about stealing just because he did it doesn’t mean other people didn’t,” user @enrique9995 said.

“But not everyone has 2 million followers from doing it,” @welchhh replied. “That’s the difference. He’s making a financial gain from other people’s content.”

“He’s stealing from small creators,” another user said. “He could have ruined [their] chance to get viral since in people’s mind “huge tiktoker = new trend owner. Like he edits the audio of the small creators just to make sure they don’t get the game they deserve.”

“I get it bruh, but you need to take it up with the app,” one commenter said. “B*tching about it won’t get you nowhere. Fix it.”

Bailey posted a followup video on April 9 revealing that Trujillo apparently messaged him on Instagram to ask him to delete the initial video. Bailey played a screen recording of the messages, which were sent via Instagram’s voice function.

“You can kindly take it down and we can just, you know, be cool and move on from all this sh*t,” Trujillo appears to say in the video. “Or you could just leave it up and have a lot of enemies from here on out.”

In the followup video, Bailey also says that he privated the video for a day because he “didn’t want to become the drama TikToker.” However, he quickly changed his mind.

“But then I realized, me posting that video wasn’t me starting drama,” he says in the video. “I was just standing up for myself.”

Bailey unprivated the video, and he says that soon after, Trujillo sent him another Instagram message threatening legal action. He showed a screenshot of the alleged message in the video.

“As of today me & my management team will be proceeding with a False Accusation lawsuit against you,” the message reads. “I wish we didn’t have to go this far but you leave me no choice.” It is unclear if Trujillo or his management team have filed any lawsuits against Bailey.

In a clip of a TikTok live stream reviewed by the Daily Dot, Trujillo addressed the controversy, saying “nothing’s original” and seemingly admitting to copying content.

“Imagine showing hate to somebody on the internet,” Trujillo said during the live stream. “Like bro, just show love. Who gives a f*ck about some little copied content? Like, just make it good, and yours will get a lot of views. Do good expression, act well. I’m an actor. I’m not a writer, I’m not a f*cking storyteller. I’m an actor. You give me a script, I will f*cking nail that sh*t. And I’m not gonna think of it, no, but I’m gonna make yours better.”

Some viewers were quick to question Trujillo’s alleged DM to Bailey, commenting in the live chat that what he was saying contradicted the “false accusation” he seemed to be suing Bailey for.

“You the one suing him and you wanna talk about love,” @trvplordling said.

“HOW COULD YOU SUE FOR FALSE ACCUSATIONS IF THE ACCUSATIONS ARE LITERALLY TRUE?” @brandonwalker517 commented.

In a YouTube video posted on April 8, Bailey includes more context to his followup TikTok and clarifies that he wasn’t trying to “cancel” Trujillo since the offense was pretty minor in his eyes.

“That’s why when I made the video—I made sure not to make it super serious, but people still got mad,” Bailey says in the video.

Bailey also responds to comments claiming that stealing is a part of TikTok culture.

“The thing is, I’ve had videos stolen before; that’s not necessarily the issue,” Bailey explains in the video. “Even people as big as Mr. Beast get their content ripped off of. It’s inevitable as a content creator. It’s the fact that this dude already had like a million followers, yet was stealing from so many other creators who were a lot smaller than him while giving zero credit. And like I said, I do understand that copying, in general, isn’t gonna stop. It is the internet. But I also feel like there’s a point to where if you get big enough, you shouldn’t be stealing content.”

He further explains why he uploaded the callout in the first place, saying that he wanted to make a statement and show that bigger influencers can’t steal from small creators without attribution.

“Yeah it is just TikTok, but it’s also a platform where people could build careers from,” Bailey continues. “Are we just gonna act like a 16-year-old girl didn’t get invited onto Jimmy Fallon because of that app? You can get brand deals, advertisements.”

In the comments of his original video, Bailey said he “wasn’t tryna make it a race thing,” though TikTok has been said to prioritize white creators’ content over that of Black creators. In the April 10 live stream, a commenter called out Trujillo’s “white privilege,” to which Trujillo responded he was “not white” but “Spanish” (in his bio, he features the Colombian and Ecuadorian flags). Still, people have accused him of being a “colonizer” in his videos.

TikTok trends do often involve the recreation of viral dances, transitions, and joke formats, but app etiquette—especially for larger creators—is to attribute the idea to the person who originated it, either through the use of their original sound or by tagging them in a caption. Even so, the app has an ongoing, well-documented history of popular white and other non-Black influencers capitalizing off of the dances, sounds, and ideas of smaller Black creators who often go uncredited. Most recently, Addison Rae was called out for profiting off of dances made by mostly Black TikTokers and for failing to credit the original creators during her appearance on The Tonight Show.

Update 6:54pm CT, April 14: Following Bailey’s video, Chris Carter, a TikToker with 1.6 million followers, came forward with his own allegations against Trujillo, revealing that Trujillo allegedly sent him a similar threat. “Here’s my DM I got from him after I made a YouTube video exposing him,” Carter says right before playing the alleged voice recording he received from Trujillo.

“You can simply delete your videos, and move on from all this. Or you can leave it up, and do your thing,” Trujillo allegedly says, adding that Carter will “have a lot of enemies from that” if he chooses the latter.

Carter adds that he “didn’t want to add fuel to the fire” but that Trujillo blocked him. “I feel like I can say this now,” Carter says.

Update 8:03pm CT, April 15: When reached for comment, Carter shared with the Daily Dot the full voice recording he allegedly received from Trujillo. In the recording, Trujillo allegedly accuses Carter’s video of “fucking up (his) account,” saying he is getting repeatedly banned from posting new content after Carter’s viewers allegedly reported him.

“I just think it’s silly that a creator like him could act so childish to somebody calling him out for something very easy to admit to. Saying that I’m going to have ‘enemies’ from this is so funny!” Carter said of the recording.

Carter added that he doesn’t think it’s OK for TikTokers to copy content “verbatim” and that crediting creators can go a long way.

“Credit is really important to smaller creators as well. When a bigger creator like Trujillo makes a video and it is exactly like a smaller creators video, it’s like a punch in the face. He likes to take others videos and copy them exactly word for word with no tags of the original person. It’s disrespectful to original creators,” Carter said.

The Daily Dot has reached out to Bailey and Trujillo.