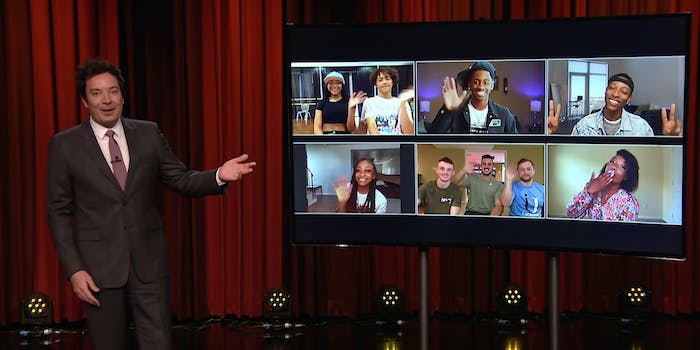 Jimmy Fallon invited the dancers to talk about going viral.

A couple of weeks ago, TikToker Addison Rae was criticized for her appearance on The Tonight Show after she performed several TikTok dances without giving the creators credit. But now those creators are getting their moment to shine.

Jimmy Fallon introduced the segment by referencing the previous segment with Rae before he launched into interviews with nine of the people who created those dances.

“On our last show before break, we did a bit with Addison Rae, where she taught me eight viral TikTok dances,” Fallon said. “Now, we recognize that the creators of those dances deserve to have their own spotlight, so right now, some of the creators will join me to talk about how their dance went viral, and then perform the dance themselves.”

In late March, Rae appeared on The Tonight Show to demonstrate eight separate dances for Fallon, but the segment quickly drew ire. A short clip presenting Rae’s dance moves side-by-side with Johnson and Cotter dancing to “Up” went viral as Rae faced accusations of cultural appropriation and not giving the creators credit. But watching both versions together also showcased the difference between Rae’s efforts to recreate the TikTok dances and the amount of energy the creators put into those dances.

A couple of days later, Rae told TMZ that “It’s kind of hard to credit during the show…but I support all of them so much.”

Throughout the segment, Fallon featured five different viral TikTok dances and talked with them about the creation of their dances and their reactions to going viral—and in some cases, being highlighted and praised by the artist whose song they danced to. At the end of each mini-interview, they performed those dances for the audience.

“So happy these creators were able to be highlighted,” she wrote. “I hope we can all dance soon.”