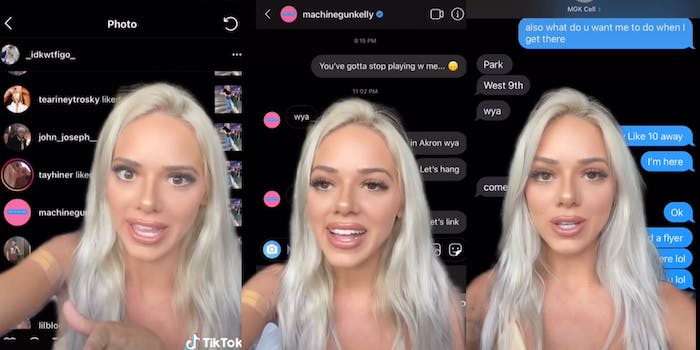 ‘He ended up cussing me out, calling me a dumb b*tch, a weird b*itch.’

“Hey sis.” No, it’s not an untimely James Charles reference—it’s how people online are trolling Machine Gun Kelly this week.

MGK is being put on blast after a viral TikTok by user @emmielamp shared his DMs to her (pre-Megan Fox, of course). According to Emmie, the rapper—né Colson Baker—messaged her on Instagram in 2019. She says in her TikTok video that he was her “biggest celebrity crush” and that he invited her to meet up with him in Cleveland.

She continues by showing screenshots of him liking one of her Instagram posts, direct messaging her, and texting her. She says she was “fangirling like crazy.” Then, things quickly went south after she accidentally called him “sis” and he allegedly “cussed her out” and called her a “dumb bitch” and “weird bitch.” After excusing herself to use the restroom, Emmie says she cried and went home.

“Have fun, Megan Fox,” she jokes at the end of her video.

Commenters were in disbelief that this comment caused such an intense reaction.

“I’m DYING that you called him sis and he had a full meltdown,” one user said. “Masculinity’s fragile girllll”

“We call girls ‘bro” all the time, why shouldn’t we call dudes ‘sis,’” another mused.

Some viewers wrote about similar encounters they allegedly had with MGK.

“My friend had a really similar thing happen with him…” one person wrote. “She went to see him play he invited her to hang out after the show.”

“I’m from Oklahoma, & know two girls around here he’s hooked up with,” a comment claimed.

“He hooked up with a girl from my hometown after one of his concerts,” another said.

One of the top comments on the video suggested that people comment “hey sis” on MGK’s Instagram posts, and folks seemingly obliged.

In a followup video, Emmie says that the night was actually “crazier” than she described but that “sis” came out after she picked up his dropped hat off of the floor and handed it back to him while saying: “Here sis.” He apparently found it disrespectful.

In a statement to the Daily Dot, Emmie said she didn’t expect her video to go viral. She said she wasn’t “trying to throw dirt on his name” but found the response to her story funny. She said that he hasn’t reached out since the TikTok blew up, but she’s not holding her breath.

She reflected on the incident, telling the Daily Dot:

“After it happened I was so embarrassed I remember going in the bathroom to cry and calling my friend Megan to pick me up in tears. I honestly don’t know what I expected going into the situation, but definitely not that. Looking back on it now it’s a funny story to tell!! I do wish he would’ve reached out or even apologized but it is what it is. Based on all the other stories I think that’s just the kind of person he is.”

The rapper has yet to respond to the video, but the Daily Dot has reached out to his representatives for comment. He’s been a little preoccupied making headlines for his relationship with Megan Fox, most recently at the Billboard Music Awards.