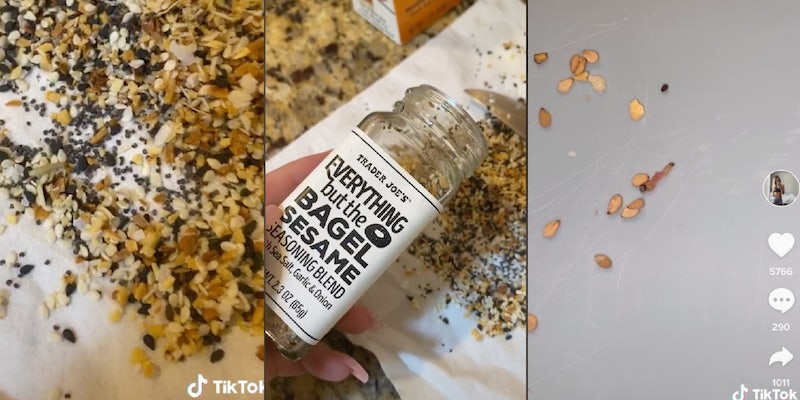 Users are now checking their own bottles.

As if grocery shopping during a pandemic wasn’t stressful enough, now we have to worry about finding worms in our Trader Joe’s Everything but the Bagel Sesame Seasoning.

Earlier this month, TikTok user @via.tiff shared a video of her parsing through sesame seeds and onion flakes with a knife, only to reveal an alive and well green maggot strolling through the beloved Trader Joe’s seasoning.

Two weeks later, on Aug. 22, user @rowannmckenzie discovered her own small insect in her bottle.

As Mckenzie says at the end of the video, this little bugger seems dead, but dead or alive, that’s allegedly two insects in two weeks in the Everything but the Bagel Seasoning. Time to sound the alarm?

The seasoning is one of Trader Joe’s main attractions and one of the most versatile flavoring options on the market. The sightings spurred a wave of duet responses, with users showing themselves searching their seasoning for bugs. Thankfully, as of now, the number remains at two.

Now, we should take these videos with a grain of salt (no pun intended). Some TikTokers will jump on any opportunity to go viral. And some commenters are suggesting the seasoning was old or not sealed properly, making it easy for bugs to get inside. In any case, shoppers might start to double-take the next time they consider turning their meals into everything bagel delights. Some might even start turning to alternative brands after TikTok users like @jeny.895 found no bugs in their Sam’s Choice Everything Bagel Seasoning Blend.

The Daily Dot reached out to Trader Joe’s for comment. For now, it might be safest to get your everything bagel fix by making the seasoning yourself.