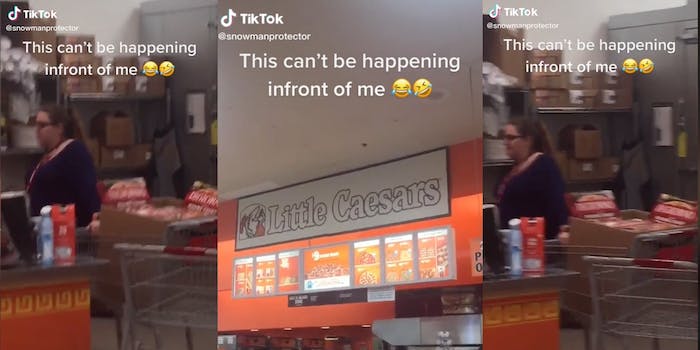 'They probably ran out of stuff.'

A viral TikTok video of a Little Caesars appearing to receive a delivery of DiGiorno frozen pizzas has people reiterating an adjusted version of the latter’s slogan, and questioning how much they really want a $5 carry-out deal.

The video features a Little Caesars location which appears to be inside of a grocery store, before panning to a cart containing a box full of frozen DiGiorno pizzas. It has gained 547,000 likes on the platform.

One commenter suggested this may be due to the shortage of ingredients, as many businesses face a shortage of common fast food items due to labor shortages.

Other commenters who claim to work at the pizza chain have challenged the claim that a store was using DiGiorno pizzas to fill supply gaps.

“Guys I work at Little Caesars and we literally make our own pizza we start off with the dough from scratch,” A user named Sophia wrote. “They probably ran out of stuff.”

Another user pointed out that customers are getting what they pay for with a “Hot n’ Ready” pizza. There’s no guarantee about freshness in the name at all.

This user offered an alternative to the hypothesis that an ingredient shortage caused the strange situation shown in the video. They claim that Tyson’s recent recall has impacted Little Caesars because they buy their pizzas from the meat processor.

The Daily Dot has reached out to Little Caesars regarding the video.