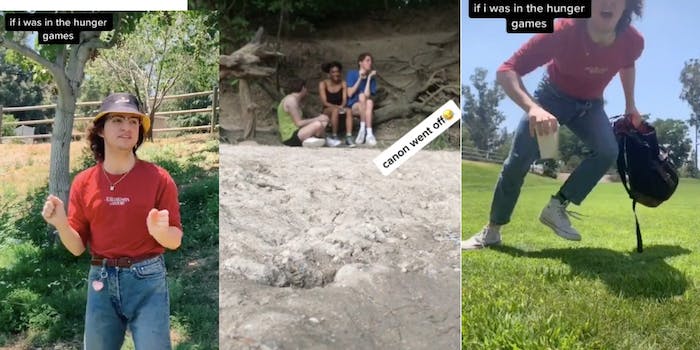 TikTokers are sharing how they would, or wouldn’t, survive the ‘Hunger Games’

Many say they wouldn't last.

TikTokers have found creative and humorous ways to bring back Twilight, Mean Girls, and now, the Hunger Games. TikTokers are absolutely roasting themselves making videos about how they would, or more likely wouldn’t, survive the Hunger Games.

The original post was created by TikTok user @codeinebabi, who posted a video of “the gays and girls alliance” during the games. The TikTokers said they were “dead*ss hungry” and laughed when a cannon went off, which signals a tribute’s death.

The trend took off and other TikTokers used the sound to show how they would act in the Hunger Games, and why many of them wouldn’t last.

TikTok user Garrett Daniels posted a video of himself running back to the cornucopia for his Starbucks while yelling “I’m lost” at the sky and getting grossed out trying to eat grass.

Popular skincare vlogger @skincarebyhyram posted a video pretending to vlog to a tree about healing cream.

Many TikTokers decided they would do some DIY TikTok crafts in the arena like bleach tie-dyeing their clothes and embroidering new outfits.

“Catch me looking fresh whilst getting killed,” one TikToker captioned his video.

Many TikTokers decided they would jumpstart their new career as a vlogger and live-stream the experience for their followers.

There were a few who were in it to win it.

But most just admitted they would be the first ones killed.

“I just don’t have a winners mindset,” one TikToker said.

The hashtag #hungergames has 1.4 billion views, and the sound has been used to make 14,700 videos.