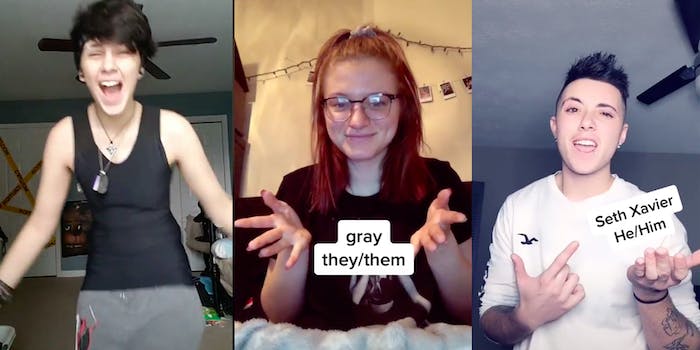 A meme meant for transgender and nonbinary people is being mocked on TikTok by cisgender people (people whose gender identity corresponds with their assigned gender at birth), according to Know Your Meme. The trend involves people sharing their deadnames and former pronouns as Grace VanderWaal’s “I Don’t Know My Name” plays in the background.

When she sings, “I now know my name,” people show their chosen names and pronouns. But cisgender are using the trend to announce fake pronouns.

The origins of the meme remains a mystery, but according to Know Your Meme, the earliest adaptation of this trend was from user @meh.its__ehh in November 2018, whose video accumulated 73,000 likes in two years. Users @graysansom and @sethxavier98 followed the trend, garnering over 143,000 and 81,000 likes, respectively.

On Feb. 22, user @sarwilson posted a new version of this trend. She used the same audio and had pictures of herself with her name and her pronouns, but at the climax, she announced her pronouns were “Sto/ner” and donned a baggy sweatshirt, gray sweatpants, and a backward cap. The video, which was posted in February, amassed over 1 million likes and 8 eight million views.

“To all the people using the ‘I now know my name’ sound on TikTok, you aren’t funny,” Twitter user @leathenerdd tweeted on June 5, “it isn’t a clever joke. People have died for being trans so stop making everything about you.”

Even outside the meme, cisgender people too often appropriate pronoun discussions at the expense of transgender and nonbinary people.

On April 21, user @damexpatr tweeted, “I blocked a cis person for saying ‘my pronouns are that/bitch’ no [you’re] cis and your pronouns are mad/annoying.”