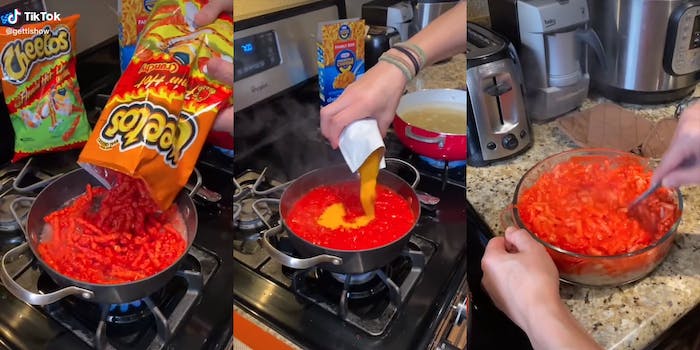 Seriously, why would you do this?

Hot Cheeto-flavored instant mac has been available in stores for a while now, but for some reason, one TikToker decided she needed to make her own version instead.

She put Hot Cheetos in a pan, cooked them into an unappetizing goo, and then added it to mac and cheese…

The video comes from TikTok fitness influencer Getti Kehayova, who also teaches online hula-hooping classes and owns a Guinness World Record for the largest hula hoop spun. She boasts 592,000 TikTok followers, many of whom hate her cooking.

While you can’t exactly call it made from scratch, as she still used boxed mac and cheese combined with bags of Cheetos to make this monstrosity, it’s still slightly more homemade than the ready-made stuff you can buy in the store.

Why you’d want to though is another question entirely.

Especially as, unlike the readymade stuff which just adds Cheetos seasoning to the boxed mac, her version includes over a bag of actual Cheeto slurry added to the sauce.

The TikTok is getting slammed online as typical white peopling for among other things, how white people “refuse to use seasoning.”

With one Twitter user making a bold suggestion: “White women are now banned from cooking.”

Meanwhile the author of this heinous food crime is completely unphased by the slew of outrage her video inspired.

She’s even has gone on to commit yet another act of culinary terrorism with this spaghetti, mince, and Nerds casserole. Yes, that’s right, Nerds as in the candy.

At this point it’s probably safe to say she’s just trolling us all.