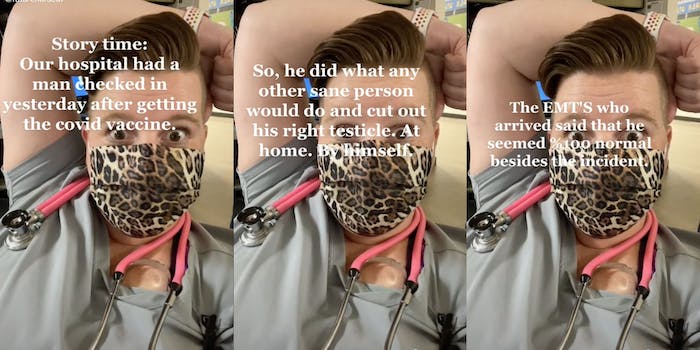 ‘This story is nuts’: Healthcare TikToker tells story about man who cut off his own testicle because he thought it had a vaccine chip

The saga went viral on TikTok.

A healthcare worker went viral on TikTok after sharing a story about one of her hospital’s patients who cut off his left testicle.

The worker, known as @futurenurseut on TikTok, said the man checked into the hospital after getting a COVID-19 vaccine and deciding he was implanted with a tracker that had traveled down to his testicle. The TikTok video received about 1.4 million views and 128,000 likes, and viewers are shocked.

“This story is nuts,” one viewer cracked in the comments.

After the man decided that his testicle was chipped, he did what any rational cis man would do: He cut it off with a serrated knife. Once the testicle was removed and the man had searched down there for the alleged microchip, he realized he was bleeding profusely and called 911.

According to the healthcare worker, the man had nicked an artery. The EMTs who arrived at his home said the man seemed 100% normal—other than the missing testicle.

In a follow-up TikTok, the healthcare worker revealed that the man believed he was kidnapped by a gang who forced him to get the vaccine. The worker shared no supporting evidence to indicate whether the gang was real or not.

But the man and his remaining testicle were sewn up and are allegedly now staying in the hospital’s psych unit.

One viewer commented that he should have a psych consultation immediately with a 72-hour hold after. Someone else said they weren’t sure if this was a psychological breakdown or just too much Fox News consumption—but that it was unfortunate either way.

The healthcare worker said the man was adamant that he needs to move presumably to a new home as soon as he is discharged from the hospital because the gang is now stalking him.

“As a medical professional, I feel a lot of sympathy for this man,” the worker said in the TikTok. “But, I also have a morbid sense of humor and had to share.”

Viewers weren’t as sympathetic as the healthcare worker. Several questioned why the man was so worried about a possible microchip in his testicle when he surely owned a cellphone, which notoriously has GPS tracking ability.

“I guarantee he probably called 911 with his smartphone that has gps tracking ability. He really thinks he’s that interesting to be tracked?” one user commented. Another wrote, “They have lost their dang minds. Afraid of a tracker when they carry a cell phone in their pocket.”

Regardless of whether the man actually had a gang stalking him or he somehow truly had a microchip in his testicle, COVID-19 misinformation runs rampant daily. For more information about the vaccines, visit the Centers for Disease Control and Prevention.

The healthcare worker did not respond to the Daily Dot’s request for comment.