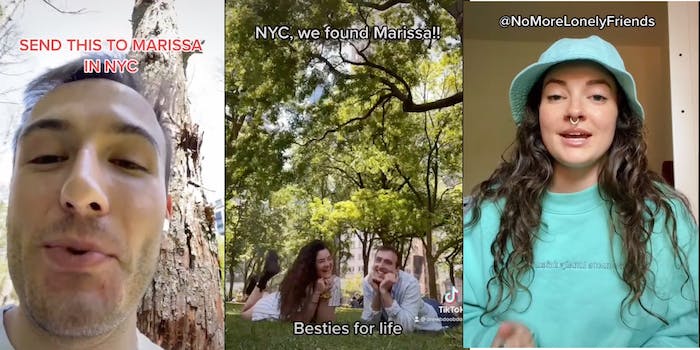 ‘I felt played’: Woman dumps her entire friend group after TikToker overhears them saying mean things about her

A New York woman has cultivated an entirely new community of friends after a TikToker overheard her old friends shit-talking her.

The Daily Dot previously reported that TikToker @drewbdoobdoo, or Drew, shared a TikTok video to let Marissa Meizz, a woman in New York, know that her friends were specifically making plans without her.

“I hate to be the one to stick my nose where it doesn’t belong, but if your name’s Marissa, please listen up,” he says in the video. “I just walked by your friends, and I need to tell you that the weekend you’re away is not the only time that they could do their birthday party. They are choosing to do it the weekend you’re away, and you need to know.”

That video was shared on May 17.

She responded with her own video recently, saying that she had been sent Drew’s video repeatedly. She had gone out of town that weekend, and a friend would not reschedule a birthday party, she said.

Just one day after Meizz responded to Drew’s call to find her and tell her that her friends were being deceitful, they met and declared themselves besties for life, according to the caption of a follow-up video shared to Drew’s account.

Meizz told BuzzFeed that she was hurt by the situation, but she quickly realized they weren’t the best friends for her in the first place.

“I felt played, but realized that if I instantly thought the video was about them [her friends], then the friendship probably wasn’t the best for me anyway,” Meizz said.

The reason they didn’t want her at the party is even less friendly.

“They wanted the boys at the party to be interested in them and not me (I think that’s a terrible reason to not invite someone),” Meizz told BuzzFeed. “They have yet to apologize or even reach out to me about any of this. I have decided to part ways with them and take my positivity elsewhere to create more loyal and amazing relationships.”

When other users expressed that they’d had similar experiences with bad friends, Meizz created Marissa’s Friend Club, an Instagram account with the handle @nomorelonelyfriends, which connects people who have bad friends and organized meetups.

She shared a TikTok in which she stated that her first meetup of all her new friends drew about 160 people.

“Yesterday we had our very first meetup in Central Park in New York City, and we had about 160 people show up,” Meizz said. “We are a safe space to make friends, especially coming out of this pandemic. We know how hard it took on friendships, mental health, everything of the above.”

The account uses polls on its story to gauge interest in new meet-up locations.

The Daily Dot has reached out to Meizz and her @Nomorelonelyfriends page.