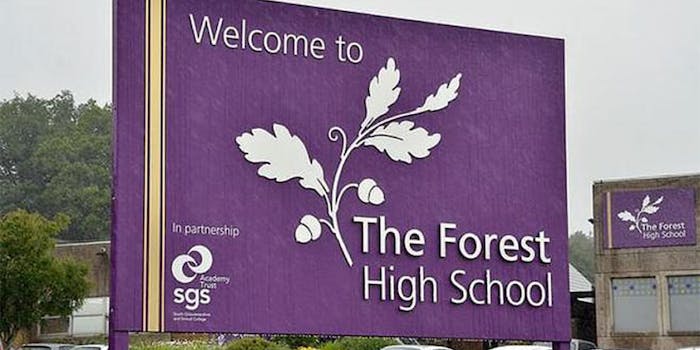 The video floated around the school until the mother saw it.

A U.K. mother saw TikTok videos of her son with special needs being abused and kicked around over the weekend, according to reports by Gloucestershire Live.

Two boys of a local school in Forest of Dean in Gloucestershire, England, were reportedly seen in videos pushing and kicking the boy on the floor as he repeatedly asked them to stop.

Other videos, recorded by two teenage girls, show the boys pushing the victim to a gate and kicking him, and him almost walking into oncoming traffic to escape the boys while they try to grab him.

The teens then put the videos on social media site TikTok, which have since been taken down. But before they were removed, the video was passed around and the mother of the victim received the videos. She reportedly confronted a parent of one of the perpetrators, which is when police were called.

The age and name of the perpetrators have not been released, but they are students at Forest High School, according to the report. It’s not clear if the victim attends the same school.

“I only watched a few seconds before I went into hysterics. I can’t bear to hear him begging them to stop. It makes me feel sick thinking about it,” the mother of the victim has said.

“They are only children but even children should know that you don’t kick people in the head. If he had banged his head on a stone they could have killed him,” she said, adding that when she asked her son about the video, he tried to deny it at first, and is really upset about it.

The incident happened outside of school premises and during the weekend, and has set a wave of uproar across the town of about 80,000.

South Gloucestershire and Stroud Academy Trust, which runs the school, have condemned the attack in a statement, and asked for locals to “remain calm.”

The brutal nature of the attack has set many on edge. On Facebook, many shared their frustration with teenagers having access to such media without proper understanding of their implications. And many were angry at the school asking people to “remain calm.”

“Please can we all regularly check what kind of content is on our kids phones. This was proudly shown to my son who was horrified and disturbed to see this awful video,” wrote one woman.

“Appealed for calm!??” wrote another person. “If that was my child trust me calm would be the last thing you’d bloody well get!!!! And what are they doing with these pupils then? Bet their back behind their bloody desks!!!! No punishment that’s why these people think they can get away with it. Sorry if my child did that I’d be absolutely mortified!!!!”