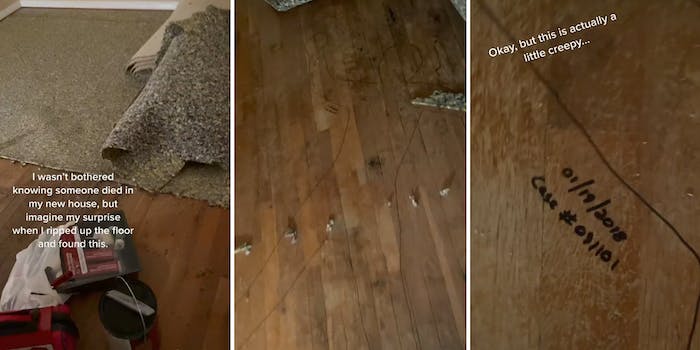 The TikToker notes she was already aware a previous tenant died in the house.

If TikTok has taught us anything, it’s that real life can be surprisingly similar to a horror movie. Following in the footsteps of the people who found a secret apartment on the other side of a bathroom mirror and introduced us to an abandoned ghost town, a new TikToker claims she found the outline of a dead body under her carpet.

TikToker @dontbeanashole went viral thanks to a video where she peels away part of her carpet, revealing what looks like a crime scene outline of a body on the floorboards. “I wasn’t bothered knowing someone died in my new house,” she says, seemingly revealing that she was already aware a previous tenant died in the house. “But imagine my surprise when I ripped up the floor and found this.”

This is a creepy thing to find in your house, but it’s highly unlikely to be real evidence of a crime scene. While chalk outlines are a popular trope in classic movies and TV, this definitely isn’t common practice among modern police. In fact, drawing an outline around a body would contaminate the crime scene. These days, investigators mark out important parts of a crime scene by planting little flags or labels and then taking photos of where everything was located. So the outline this TikToker found in her apartment is probably a hoax or prank made by the previous occupants.