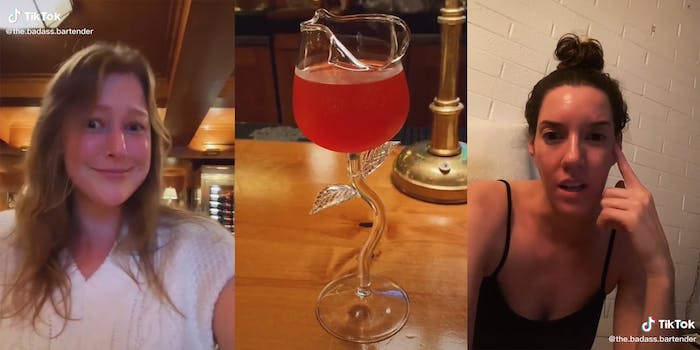 Other former bartenders told people it was OK to steal.

TikToker @haleydito went viral with her relatable video about wanting to take home a beautiful rose-shaped cocktail glass from a bar. But while the urge at least to “borrow” something so pretty is understandable, people following through on that urge is also a real problem for bartenders, as @the.badass.bartender talked about in her video posted to the app last week.

A veteran bartender who’s worked in multiple venues across the industry for years, @the.badass.bartender initially responded with a short stitch, explaining that instead of stealing you can find almost any specialty glass for sale on Amazon. She also called people who steal glasses assholes.

However, responses to her initial video were mixed. While some got the point she was making—that it was about the specialty glassware in particular and how stealing those glasses makes the bar staff’s lives harder—others did not. Even some other bartenders were calling her a Karen and encouraging people to keep on stealing glasses.

So she made another video elaborating on the reasons why stealing the special, fancy cocktail glasses from a bar is a shitty thing to do.

The cocktail specials that are served in those unique, gimmicky glasses are usually designed to their specifications, and so for various reasons—ice, measurements, etc.—often can’t actually be served in other glassware, @the.badass.bartender explained. And those special cocktails are often the most popular drinks available, and if people can’t buy them because they’ve run out of the glasses, then they leave. No patrons = no tip. And in the service industry, where it’s both legal and standard practice to pay people below minimum wage on the grounds that it’s made up for by tipping, that’s a real problem for the staff.

Basically, stealing the fancy glasses leads to angry patrons who take it out on the staff, stressed out bar staff trying to keep the handful of glasses left clean and in rotation, and fewer tips. If you really want a glass, and you don’t want to support Amazon as some of the commenters on her videos have said, try asking at the bar, @the.badass.bartender said. They might be willing to sell one to you if they have enough left or the drink is being discontinued. That way, you can still walk out with the pretty glass at the end of the night without screwing over the staff in the process.