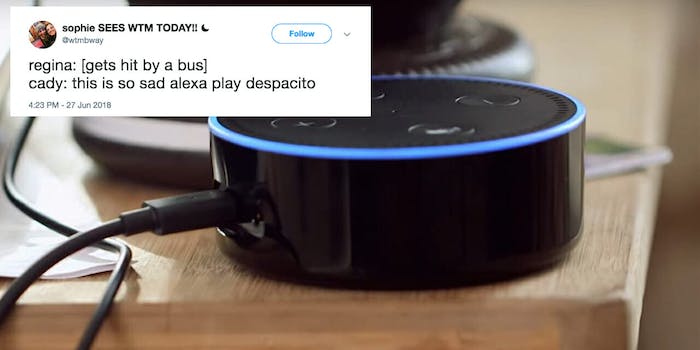 If you're not into 'Despacito,' insert another song instead.

Ever been so sad about something you’ve just seen, read, or heard that you just had to express your feelings on Twitter, or in a text? Maybe you said something like “That’s so sad.” But then you really wanted to hear your favorite song (because reasons), so you turned your head away from the screen and immediately called out to Alexa to “play ‘Despacito!‘”

Uh, us either. But we sure do like the fun and strange new word salad-like meme that’s been making the rounds. Say it with us: This is so sad Alexa play Despacito. It may not make sense at first but just think about it. Someone’s just said something that you’re supposed to be upset about. You’re supposed to empathize. Instead, you’re only half-listening and you want to hear “Despacito.”

The apparent creator of the meme told New York magazine’s Select/All that he posted the line “this is so sad alexa play despacito” a week ago to Tumblr after his cat ate his spaghetti. And now people are using the line to lighten the mood after a sad event. It’s a half-hearted, misguided attempt to make things “brighter.” And “Despacito” is a rump-shaker and a half. It could probably liven up anything, right?

Me talking to my depression: Hi, can you give me a break? I have finals and too many tests and job interviews and I haven't slept properly in ages and I-

My depression: this is so sad, Alexa play despacito

The meme gets funnier the more it’s combined with our favorite pop culture scenes, ranging from Game of Thrones to Mean Girls and everything in between.

regina: [gets hit by a bus]
cady: this is so sad alexa play despacito

thor: my sister is taking over asgard and wants to kill me, i need loki to come with me, and for you to release the hulk, so we can get out of here and defeat her

grandmaster: this is so sad, alexa play despacito

nakia: t'challa was murdered in a ritual combat

m'baku: this is so sad alexa play despacito

vision and wanda: *saying their goodbyes and crying*

thanos: this is so sad alexa play despacito

lysa: *gets thrown out the moon door to her death*

sansa: this is so sad alexa play despacito

If even works when the meme is applied to our Extremely Online selves.