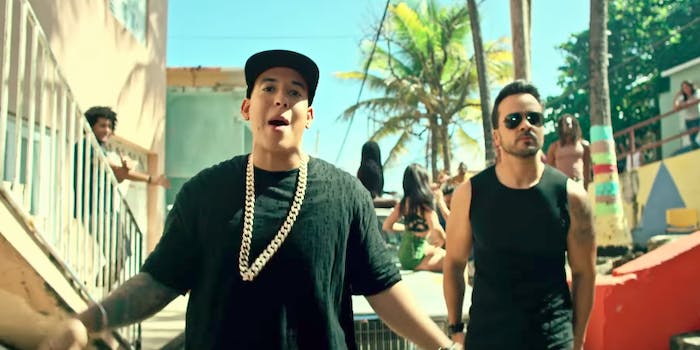 ‘Despacito’ just became the most-streamed track of all time

The song smashed the all-time streaming record in just 6 months, racking up 4.6 billion plays across platforms.

Last month, the Daily Dot speculated whether “Despacito” would become 2017’s song of the summer. Now it’s clear that prediction was too narrow in scope, because in just six months, Luis Fonsi and Daddy Yankee’s smash hit has become the most streamed track of all time.

Business Insider reports that between its original version and remix featuring Justin Bieber, “Despacito” has racked up a staggering 4.6 billion streams across platforms. That breaks down to 1.1 billion Spotify plays and more than 3 billion views across official YouTube channels. Bieber also usurps his own global streaming record that he formerly set with “Sorry” and its corresponding remixes, which have generated 4.38 billion streams in total.

Yet even without the 23-year-old pop star’s assistance, “Despacito” remains an incredible success. The original version has garnered 2.66 billion views on YouTube and 563 million streams on Spotify; meanwhile, the remix audio boasts 427 million streams on YouTube and 619 million streams on Spotify. The track has topped the charts in 35 countries, including the United States, becoming Fonsi’s first No. 1 hit in the U.S. and Bieber’s fifth. It’s the fastest video to ever reach 2 billion views, and the first primarily Spanish-language song to top the Billboard Hot 100 since Los del Río’s “Macarena” in 1996.

Now, if only Bieber could stop making up words when he performs “Despacito” live.