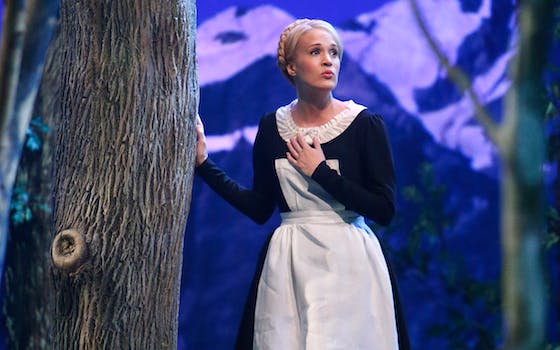 3 reasons ‘The Wiz’ should be NBC’s next musical

Music is in the air again over at NBC.

NBC entertainment chairman Robert Greenblatt has revealed that the 1957 staple is one of two shows in contention for their 2015 show, following productions of The Sound of Music and Peter Pan. Though the former of these proved very successful, Peter Pan Live! was widely considered to be a disaster, except for in terms of the live tweets it inspired. That said, NBC is clearly not backing down from this format: They’re also producing a live version of Aaron Sorkin’s A Few Good Men, while FOX gives them a run for their money with an upcoming live rendition of 1978’s Grease. However, if NBC really wants to stay on top of the live musical game, the show they should pick isn’t The Music Man, but the other musical Greenblatt said the network is considering.

That would be The Wiz, a 1974 adaptation of The Wizard of Oz that won seven Tonys for its re-imagining of L. Frank Baum’s classic tale as a microcosm of the black experience. The show was also famously brought to the screen in an Oscar-nominated film from legendary director Sidney Lumet starring Diana Ross, Richard Pryor, and Michael Jackson.

The Wiz would be a more savvy choice that the slightly outdated The Music Man; taking into account that the film actually came out in 1978 (the same year as Grease), it’s simply a better option if NBC wants to keep up with FOX. (The Internet certainly seems more excited about it than they do The Music Man.) However, there’s several other reasons why The Wiz would be the more daring, and ultimately, the more interesting pick for NBC’s next live musical.

It’s no secret that The Sound of Music, Peter Pan, and Grease are all pretty white, as far as musicals go. None of them really presents much of an opportunity for diverse casting, unless the networks actively work to achieve it, which seems unlikely. This is all the more potent, of course, in the wake of Selma‘s recent Oscar snubs, which served as a bitter reminder of Hollywood’s ongoing race problem. In fact, this may be the theme in entertainment coming out of 2014, where several potent soliloquies courtesy of Chris Rock pointed out what most of us sadly already knew: Hollywood remains a largely white industry.

It might seem silly, then, to suggest that one little musical is capable of changing this, but every little bit helps. More importantly, The Wiz represents a radical idea in our culture, that of black people in white spaces; like most of popular entertainment, the world of Broadway remains mostly a space for white folks. Similarly, The Wiz takes what is a classic story, woven deep into the fabric of American identity, and literally re-appropriates it for the black experience. In that sense, The Wiz could be not only a bold but an important choice for NBC, especially in the wake of the year that was 2014.

Of course, part of the fun in NBC putting on a black musical would just be seeing the ensemble come together out of Hollywood’s many talented black actors. The greater social implications are important too, but it’s also fun to speculate about who could play what roles.

Many are already doing this, including Bustle’s Leah Thomas, who has already thrown out a lot of possible casting options.

In the more recent past, NBC has the business cards of musical theatre stars Audra MacDonald, Jesse L. Martin, Leslie Odom Jr., and Jennifer Hudson. That’s just from Smash and Sound of Music Live. There are so many television and film stars that could be cast in this. The Good Wife’s Anika Noni Rose is the voice of Princess Tiana and was in Dreamgirls. Think about Uzo Aduba, whose character Suzanne on OITNB has crippling stage fright, but who has an incredible voice in real life… I’m not even scratching the surface of which recording artists could pull a Carrie Underwood and take a star turn. Janelle Monae has a musical theatre background… [And] what if NBC could get Bruno Mars to play the Scarecrow?

Meanwhile, Slate’s Aisha Harris adds a few other names into the pot, including Gladys Knight for Aunt Em, Usher for The Scarecrow, Drake for The Tin Man, Kanye West for The Lion, Jennifer Hudson for Addaperle (the Good Witch of the North), Beyonce for Glinda (the Good Witch of the South), Queen Latifah for Evillene, and Eddie Murphy for The Wiz himself.

Granted, some of these names are surely too busy or too big to participate in a television broadcast of a musical. But again, the point is that The Wiz offers a lot of different parts for talented black actors. Fortunately, NBC should have no problem casting it, using any number of the names mentioned above or working with a different roster entirely.

Thomas probably sums up the appeal of The Wiz most concisely when she notes that “The Music Man suffers from the same issues that Sound of Music and Peter Pan does.” She explains, “It’s too long for television. It’s even older than the two proceeding shows. There’s all this business with a barbershop quartet and the old ladies at the church. I’m a boring traditionalist sometimes, and I love this show, but I can see audiences getting bored.”

However, The Wiz would be nothing if not an interesting choice. Though Thomas also mentions that the musical is “a familiar story that appeals to all ages,” the truth is that The Wiz is also fundamentally something different, and not just for the reasons mentioned above. With its motown flavor and New York-setting, this isn’t your grandparents’ Wizard of Oz. On top of which, the film adaptation of The Wiz is undeniably weird, and not altogether successful for it. But one thing that you cannot deny is that it’s a show unlike any other out there.

So in that sense, NBC could actually win with The Wiz on multiple levels. On the one hand, they get the universal appeal of The Wizard of Oz, and on the other, they get the compelling aspects The Wiz brings to the story. In some ways, it’s a risky move, but even riskier might be adapting another familiar show like The Music Man.

Obviously, there’s still a lot of other factors that would have to come together to make NBC’s The Wiz Live! a reality, much less a successful one. For instance, the Muse’s Clover Hope wonders, “The Wiz is a smart choice, but will they also bring on some black people behind the scenes?”

Nevertheless, The Wiz is a landmark musical, and a live production would be a fascinating experience, no matter what. And at the very least, it would help make everyone forget that Peter Pan Live! ever happened.