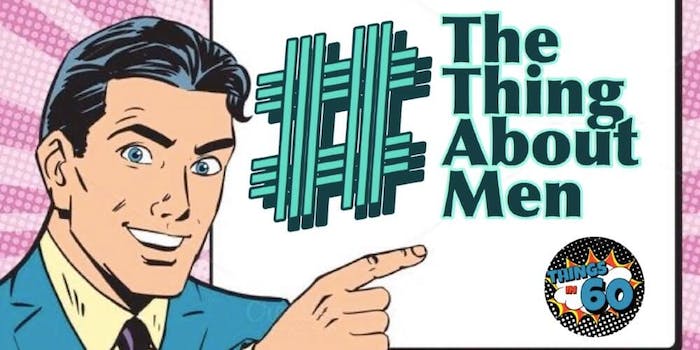 It seems that the hashtag's original intention was to praise men.

On Monday, Twitter account “Things In Sixty Tags” started a hashtag game–a social media phenomenon where an account creates a prompt, and everyone who responds helps it go viral. Today’s choice of phrase? The Thing About Men.

It seems that the hashtag’s original intention was to praise men. (Attached to the original tweet was the slightly condescending phrase, “Where would we be without men?”.) And indeed, some of the tweets followed that line of thought.

“#TheThingAboutMen is they are sexy and nice to cuddle with and their necks smell yummy,” Twitter user @kammiekayne wrote.

There was also some self-deprecating and even dry humour, with one brave soul joking that men mansplain only because they care.

And there were also some pretty good memes. Everybody loves a good men-in-tights reference.

Some chose to use the tag to draw attention to problems that men face. Twitter user @rawbeancoal reminded everyone that men have feelings too, and the expectation that they “man up” and repress emotions is damaging.

And Twitter user @KMGFromChicago used the hashtag to highlight how men’s tendency to avoid seeking medical care and failure to take care of their health causes immense health problems. (Go to the doctor, guys. Your life matters.)

Quite a few Twitter users spotted this hashtag for the trap that it was, commenting only to say how they were staying clear from the “game.”

These tweets were, of course, accompanied by the accusation that the hashtag itself is an example of misandry, or a “prejudice against men.”

Women, and some men, pushed back on the accusations, pointing out how unfair some of the tweets against women were and venting about negative things that men do.

At time of press, the fighting rages on, which is almost certainly what the hashtag’s authors wanted.