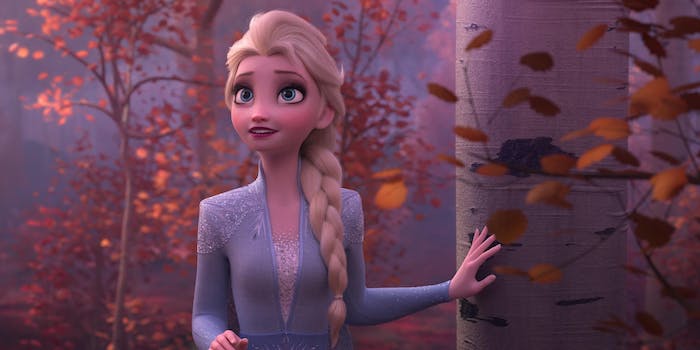 Neil deGrasse Tyson is once again criticizing films from a scientific lens, and this time, he’s set his sights on a Disney staple.

Sure, it’s been a few years since the original Frozen hit theaters, but as Tyson noted on Twitter, he’s “got [a] backlog.” And he doesn’t hold back with his initial observation about Elsa’s eyes.

His other two observations about Frozen—about the ice cubes floating in the water and the Aurora Borealis—are much tamer in comparison. But his initial comment comparing the size of Elsa’s eyes to a horse’s not only put that mental image into our heads, but it also reminded us just why Tyson’s movie tweets are so divisive in the first place.

On the one hand, it’s an interesting observation, something that Tyson’s fanbase might appreciate. On the other, Frozen is a cartoon that features a walking, talking snowman, rock-like trolls, and a queen who can shoot snow and ice out of her hands, and the film really isn’t looking to be scientifically accurate, anyway.

But there’s another reason why Elsa—and, by extension, Anna in Frozen and Rapunzel in Tangled, among many others—look the way they do. According to a now-infamous 2013 interview from Frozen head of animation Lino DiSalvo, animated female characters was difficult because they had to make sure the characters still looked pretty while circling through a series of emotions.

“Historically speaking, animating female characters are really, really difficult, ’cause they have to go through these range of emotions, but they’re very, very—you have to keep them pretty and they’re very sensitive to—you can get them off a model very quickly,” DiSalvo said at the time. “So, having a film with two hero female characters was really tough.”

And if you think that he’s going to stop trolling us all by overanalyzing films, think again. Before he delved into Frozen, he reminded us that he ran a poll a while back asking if he should bring back the science tweets—and the vast majority of people who voted actually wanted his scientific analysis of films.