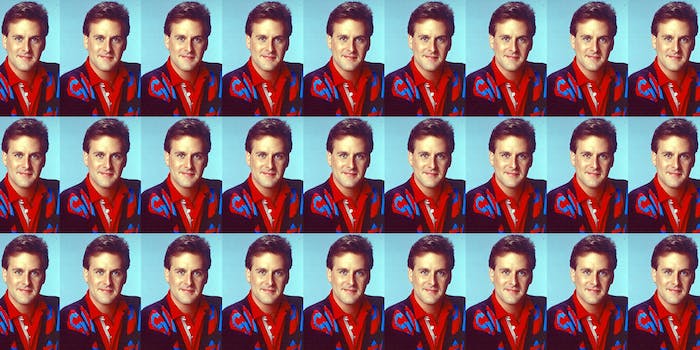 But the question remains: Why?

Hello. I’m here to introduce you to a glorious world of Facebook pages you perhaps never knew existed. Thousands of people around the world, you see, are encountering the faces of celebrities in their timelines over and over again—but always in the same poses and clothes, and bearing the same exact expression. And they like them every time.

Welcome to “The Same Photo Of _ Every Day,” a beautiful genre of Weird Facebook in which Facebook page managers repeatedly post identical photos of a single celebrities. (Tumblr users already be familiar with this concept by way of “The Same Picture of Dave Coulier Every Day.”)

But the entrance to Facebook’s scene was first pointed out to us by Mediaite’s editor-in-chief, Andrew Kirell. He noticed a page dedicated to sharing a photo of Glenn Danzig looking pensive—or perhaps sad? Or stoned?—each and every day. It has 20,000 Likes on Facebook.

The musician and record label owner has a swath of adoring fans, and the only thing better than looking at the same photo of Danzig over and over is watching the “Like” counts rise with every photo shared. If Danzig’s raven locks and black leather jacket aren’t enough to make you want to join the 20,000 strong, just look at the comments. 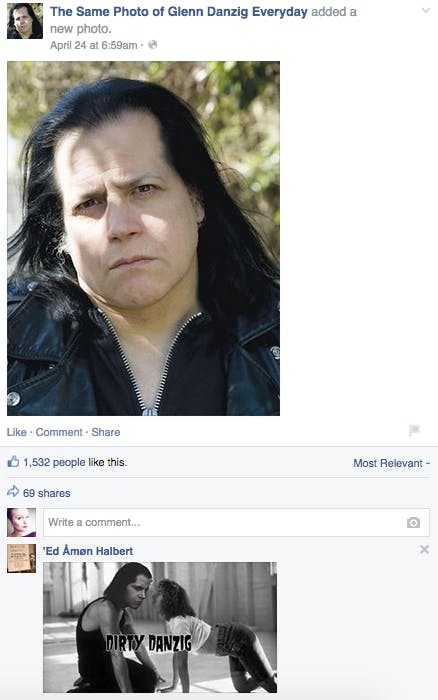 The thousands of individuals who Like Danzig’s photo each day can’t even hold a candle to other pages sharing a photo of Michael Cera’s odd mustache-orange beanie combo (31,000 fans) or a perpetual iteration of Jim Carrey’s smiling face (141,000 fans). 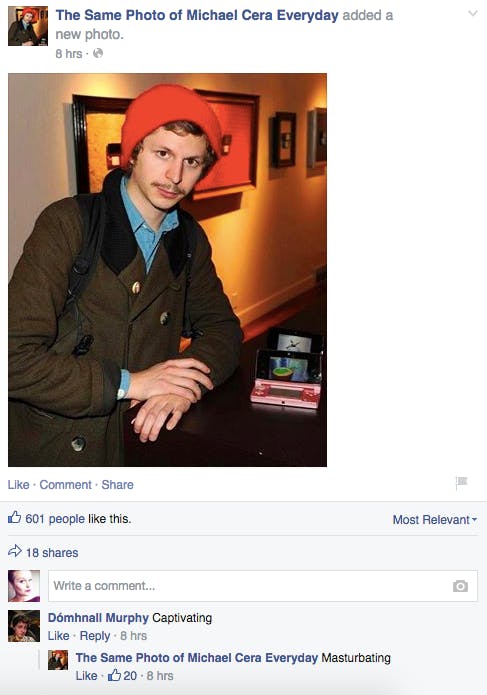 Intrepid Carrey fan Cody Hendriks, who apparently spends a lot of time on Facebook contemplating humanity’s ever-changing cycles of life, comments every single day on Carrey’s photo. And it’s almost as if the commenters keep coming back for Hendriks, not the celebrity himself. His eloquence is worthy of a motivational postcard. 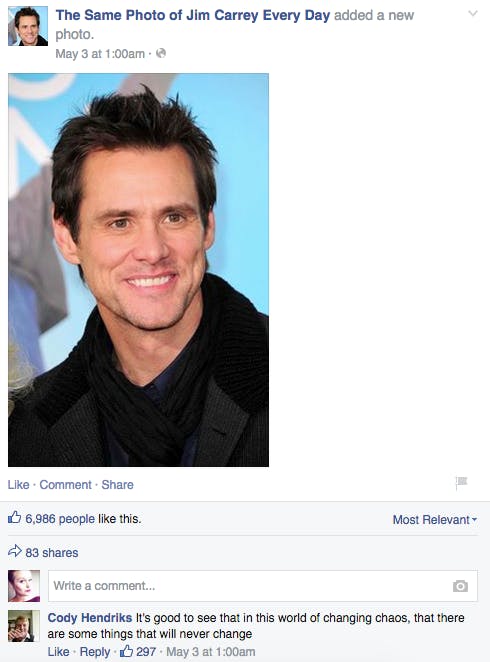 We hope you never change either, Cody.

There are a seemingly endless number of these pages. Curiously, they all happen to feature men. A cursory search for some of my favorite female celebrities left me shockingly disappointed. Yes, I would love to see the same stunning photo of Beyoncé on a regular basis, OK?

It’s unclear who’s behind the pages or if they’re all managed by different people. It’s an impressive feat, maintaining such a fanbase, and I honestly admire anyone who gets themselves out of bed in the morning knowing they simply must share a photo of Danzig before the sun sets.

If you will permit me to paraphrase our dear friend Hendriks: “Never change, Internet.”