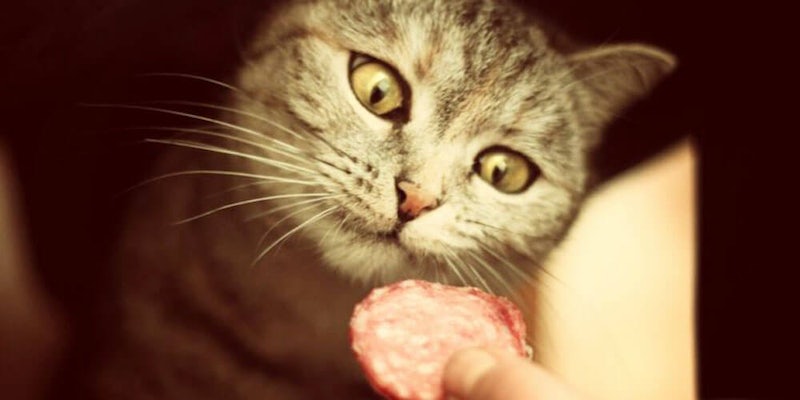 The ‘can have … as a treat’ meme has come full circle

Who doesn’t like a little treat now and then? Depending on the individual, maybe that consists of a nice glass of wine, a piece of chocolate, a spa day, or a new pair of shoes. It’s why the fictional Parks and Recreation holiday resonated with so many people. And now, it’s also a silly and sometimes sardonic “can have … as a treat” meme.

But before we get ahead of ourselves—like most things on the internet—the “can have … as a treat” meme originated from an entirely different and arguably even weirder meme, involving cats eating salami, of all things.

How the ‘cats can have a little salami’ meme originated

In July of 2017, an artisanal cured meat business called Meatmen operating out of Southern California posted a blog entry titled, “Can My Cat Eat Salami?” (It was a follow-up of a similar blog post from the week prior: “Can My Dog Eat Salami?”)

Long story short, the conclusion that the company arrived at was that “cats can have a little salami.” This is due to the fact that cats are surprising “much better than other household pets when it comes to the heavy sodium and fat content of cured sausage,” and as such, “your cat should be just fine with a couple of pieces of salami as a treat.”

This innocuous blog post would have likely gone largely unnoticed by the internet, had it not been for a Reddit post about a year and a half later to r/MEOW_IRL, which screenshot the article.

For whatever reason, there’s just something inherently random and funny about the internet confirming that it’s OK to feed your cat salami—but only as a treat! And from there, similar posts began popping up here and there on Reddit.

However, it wasn’t until November of 2019 that the meme exploded in popularity when Twitter user @twitersgoodboy posted the following Sopranos meme. “Cats can have a little salami,” captioned the image.

Within days, “cats can have a little salami” memes began proliferating the internet, as others imagined the person on the other end of the Google search result, or just got hella weird with it!

The spread of the ‘can have … as a treat’ meme

It’s unclear exactly how—but by December, the meme had evolved beyond cats and salami, as Twitter users began posting instances in which [blank] can have [blank] “as a treat.”

Most of the examples tend to be silly and absurd—as you can see in the sampling of the tweets, below.

Boyfriends can have a little of your fancy face wash, as a treat

drunk you can have a little cigarette. as a treat

twitter can have this picture of alex trebek, as a treat pic.twitter.com/CkXrm7Fa4d

jimmy can eat little a world, as a treat

frog can have a little cigarette. as a treat. pic.twitter.com/5GDt4eWMNg

Author Dana Schwartz used the format to joke about the fact that award-winning actress Laura Dern is suddenly in all of the things. (Dernaissance, anyone?)

every movie can have a little laura dern, as a treat

And then there’s this evergreen example in the age of Trump’s presidency. “Presidents can have a little meltdown, as a tweet,” quipped writer and comedian Brock Wilbur.

presidents can have a little meltdown, as a tweet.

The official Disney+ account used the “as a treat” meme to give a tongue-in-cheek nod to everyone’s favorite little green baby.

On the other hand, many others are using the “as a treat” format to put serious issues on blast, from healthcare and pay inequality, to mental illness and more.

full time employees can have a little health insurance, as a treat

americans can have a little health care, as a treat

girls can have little a 78 cents on the dollar, as a treat

people with depression can have 10 minutes of clarity a day to go about their lives, as a treat

But in the end, the “as a treat” meme comes back full circle to cats, as things tend to do.

Shelter cats can have a little rotisserie chicken, as a treat. pic.twitter.com/dZZ1jHBeox

My vet has the news on precisely how little salami cats can have as a treat pic.twitter.com/pHINGQiOqq

So in other words, cats can have three grocery brand cat treats, as a treat. Glad the internet finally cleared that up. Treat responsibly, everyone.