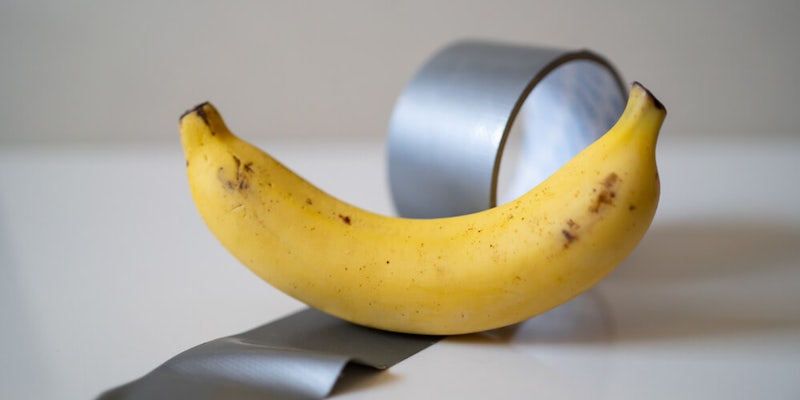 David Datuna, who ate the banana, says he believed the original piece to be a joke and responded in kind.

In what has to be peak art world drama, a famous $120,000 banana duct-taped to a wall has been eaten by another artist.

Created, for want of a better term, by artist Maurizio Cattelan, the banana wall installation at Miami’s Art Basel was called “Comedian” and was intended to show “how objects move through the world,” according to the gallery owner. Not the first work of art by Cattelan that basically doubles as a giant prank, the artist is also responsible for the gold-plated toilet entitled “America” and for duct-taping another gallery owner to his own walls and calling it art.

David Datuna, meanwhile, is a New York-based performance artist whose body of work focuses on “the convergence of art and social consciousness,” forcing people to confront reality head-on with blunt yet aesthetically pleasing installations.

Datuna told HuffPost that his “performance” was a response in kind to Cattelan’s original piece, which he believes to be a joke. In an Instagram caption accompanying the video of him eating the banana, he adds that “it was delicious,” and he can be heard saying “it’s not about publicity, because you can check it, I do so many installations around the world.”

Fortunately, or perhaps unfortunately depending on your perspective, Datuna has not actually destroyed the artwork in question. Gallery director Lucien Terras announced in the video posted to Datuna’s Instagram that Datuna “did not eat the banana, he ate a banana. I ate another one last night,” referring to the fact that the individual banana is not actually an integral part of the piece and is meant to be switched in and out with fresher ones as it goes off. As Terras later told the Miami Herald, “the banana is the idea,” and that idea plus the certificate of authenticity is what the buyer is actually paying for.

Feelings are mixed over both the banana and Datuna’s devouring of it. Some see the original piece as everything that’s wrong with the art world.

While others view it as a perfect satire of both those problems and of capitalist society in general.

With conspiracy theorists arguing that Datuna’s act was actually commissioned by the gallery to drum up publicity.

The people who bought the banana are invested in the gallery and making an absurd buy to get media attention. Then they pay this guy to come eat it and make a show of it.

The gallery gets a huge influx of traffic and social media interest. https://t.co/d9wHtE1wtW

People are offering their own duct-taped fruit for inordinate sums of money, often drawing attention to wealth inequality in the process.

Fuck what you heard about that guy who ate the #bananaart, that was a duplicate!

I have possession of the genuine piece.

One artist even recreated the entire sequence of events using an apple in place of the banana and their own hand made jewelry as stand-ins for the humans involved, which may be the most truly brilliant critique of art and capitalism yet, as well as very clever advertising for their own Etsy store.

It's now almost 1pm and crowds are lining up to be photographed with the exhibit.#AppleALaWashi #BananaGate pic.twitter.com/YIorH1i1Hf

The trademark surrealist millennial humor kicked in, with people referencing the two wolves meme and the “Creation of Adam” painting, as well as current electoral politics to fit the artistic banana theme.

Then Liz Warren will eat the banana

Things rapidly got weirder when, after the banana had been replaced with a fresh one, another member of the public decided to add his own touch to the piece. Getting out a lipstick, this artist, who has been identified as Roderick Webber, wrote “Epstein didn’t kill himself” on the canvas the banana was taped to.

Unlike Datuna, who appears to face no charges, Webber is being charged with criminal mischief for his actions, despite asking, “If someone can eat the $120,000 banana and not get arrested, why can’t I write on the wall?” as he was removed from the gallery.

The entire piece has now been removed from display, with the gallery sharing on their Instagram that due to the installation causing “several uncontrollable crowd moments” and compromising the safety of both people and artwork, they had been advised by their security company to take it down.

We regret to inform you that ‘Comedian’ will be removed from our Art Basel Miami Beach booth for the last day of the fair, Sunday, December 8th. This morning, following recommendations, we removed the installation at 9am. We want to thank the organizers of the fair for their help and continued support. Art Basel collaboratively worked with us to station guards and create uniform lines. However, the installation caused several uncontrollable crowd movements and the placement of the work on our booth compromised the safety of the artwork around us, including that of our neighbors. ‘Comedian,’ with its simple composition, ultimately offered a complex reflection of ourselves. We would like to warmly thank all those who participated in this memorable adventure, as well as to our colleagues. We sincerely apologize to all the visitors of the fair who today will not be able to participate in ‘Comedian.’ — #cattelanbanana #artbaselmiamibeach #artbasel #mauriziocattelan #cattelan #perrotin

The Daily Dot has reached out to both the gallery and David Datuna for comment and will update this piece if they respond.