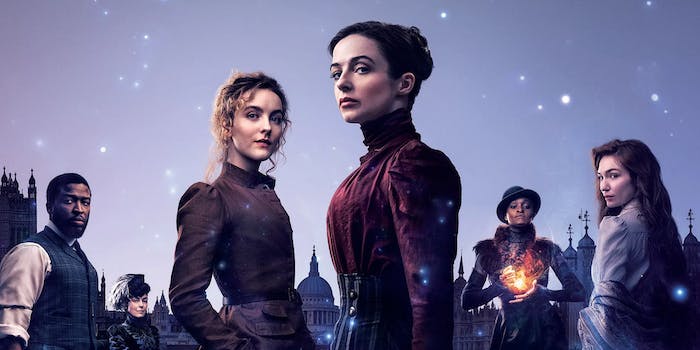 HBO’s new big-budget fantasy show The Nevers was created and co-written by Joss Whedon, who also directed several episodes. But judging by the show’s Whedon-free publicity campaign, you might not know he was involved at all. While his name used to be a selling point in itself, a series of disturbing abuse allegations recently turned the tide on public opinion. This put The Nevers in a very awkward position.

As I explained in my review of the first four episodes, HBO announced The Nevers in 2018—after Whedon’s wife accused him of emotional abuse, but before most of the allegations from former Buffy, Angel, and Justice League actors came to light. Whedon left The Nevers in November 2020, after season 1 had already wrapped filming. For obvious reasons, he didn’t participate in the show’s publicity tour, and his name is absent from many of the trailers and advertising materials, aggressively downplaying his role as creator.

There are a few different ways of looking at this. HBO obviously wants to promote the show, hoping for more seasons under the new showrunner Philippa Goslett. This is also an unpleasant situation for members of the cast and crew who were blindsided by Whedon’s abuse scandals. For many of the lead actors and staff writers, The Nevers was their big break. If HBO had canceled or buried The Nevers prior to release, this would effectively punish those workers for Whedon’s actions.

However, HBO’s solution led to an actively misleading publicity campaign. Judging by the responses to my review last week, some of the show’s target audience didn’t know this was a Whedon project. And once they found out, his involvement was an immediate turn-off. Likewise if you look at the Nevers hashtag on Twitter, you’ll see people reacting with disgust at seeing Whedon’s name in the credits:

Is it melodramatic to say HBO tricked viewers into watching a show by a notorious Hollywood abuser? After all, people do have access to Google. Whedon’s involvement isn’t exactly a secret. In fact, if you’re familiar with his work then you might recognize some of his familiar foibles just by watching episode 1. The two leads are Whedonverse stock characters: a pair of young white women who are, respectively, a self-destructive action hero and a perky science nerd. On a more granular level, the show is full of sexist and problematic ideas that appear in other Whedon projects.

With The Nevers, it’s impossible to separate the artist from the art. This isn’t just a matter of people wanting to avoid projects by a toxic creator. They also want to avoid the toxic themes Whedon brought to his work. And those themes are very obvious in The Nevers. By erasing his central role in season 1’s creative process, HBO discourages people from making an informed choice about watching the show.