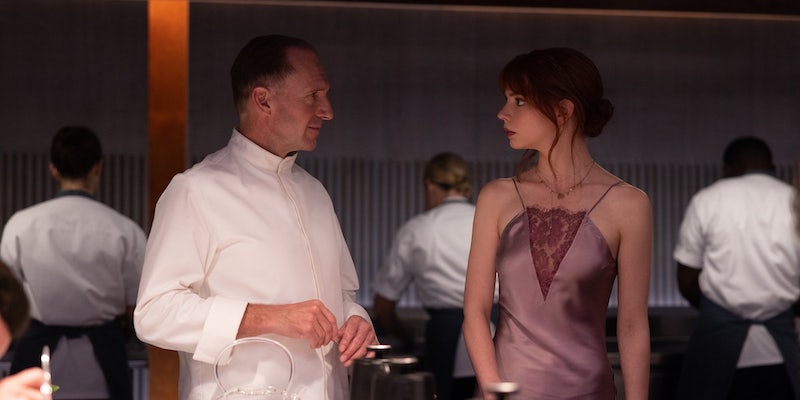 “Eat the rich” has been one course correction in cinema and TV the last few years, as the class and power struggles of fictional media (Succession) and hospitality (The White Lotus) served up some schadenfreude. This fall sees more films about the one percent behaving badly, specifically on boats, in Triangle of Sadness and Glass Onion: A Knives Out Mystery.

Warning: This review contains light spoilers for The Menu.

The Menu, an inspired dish from Succession director Mark Mylod, could be seen as an amalgamation of these themes, doled out in satisfying portions over its runtime, which blessedly comes in under two hours. But it doesn’t just take aim at the rich.

Food snob Tyler (Nicholas Hoult) and his date Margot (Anya Taylor-Joy) visit a private island to dine at an exclusive restaurant, run by impenetrable Chef Slowik (Ralph Fiennes). The cost is $1,250 a person, and as we find out, that price tag includes a personalized experience.

The restaurant only fits a certain number of people, but everyone is there for a reason, as Chef Slowik eventually reveals: A washed-up actor (John Leguizamo) and his assistant (Aimee Carrero), an arrogant food critic (Janet McTeer) and her editor (Paul Adelstein), an older married couple (Judith Light and Reed Birney), and three tech assholes (Rob Yang, Arturo Castro, Mark St. Cyr).

What exactly will happen over the course of the meal is hard to predict and the story, penned by Will Tracy and Seth Reiss, is expertly paced, punctuated by gorgeous title cards announcing the dishes. After the film had its U.S. premiere at Fantastic Fest, Mylod and producer Betsy Koch remarked on how they consulted with the producers of Netflix’s Chef’s Table to style those cards.

Taylor-Joy is solid here, fully conveying her contempt for the insufferable Tyler. (And Hoult holds his own as a man who loves to talk but knows nothing.) But Margot is also something of an unreliable guide. Her unexpected presence both intrigues and irritates Chef Slowik, who senses her outsider status. We learn virtually nothing about who she really is, and yet her who-gives-a-fuck attitude plunges the film into its darker passages.

The Menu is a satire of wealth and obliviousness but also how far removed some “genius” chefs and restaurants have become from creating food people actually want to eat. Margot points this out in a fiery monologue but the film also interrogates Slowik’s unsavory behavior and the cruelty he could inflict on his employees. For his part, Fiennes seems to be having fun here; his chef is self-aware to know this is all bullshit—which should be more of a thrill than it ultimately is.

The Menu is certainly entertaining, and it’s a movie you want to see with a group. Even at under two hours, however, its central conceit starts to wear thin in the third act, and the final shot, though symbolic, left me a little hungry.