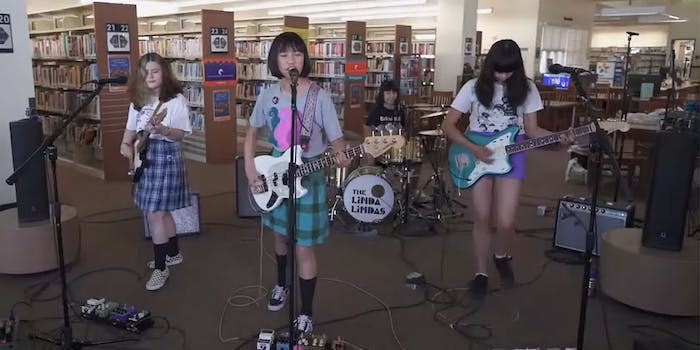 ‘This is about him and all of the other racist, sexist boys’: Teen punks the Linda Lindas destroy at the public library

Even Bikini Kill and Rage Against the Machine love 'Racist, Sexist Boy.'

Earlier this month, the Los Angeles Public Library hosted the Linda Lindas—a local Asian and Latinx band whose sound is a blend of punk, power pop, and new wave—for a mini-concert as part of its “TEENtastic Tuesdays” to kick off AAPI Heritage Month. But their performance is now going viral after the LAPL posted one of the songs on Twitter.

LAPL tweeted a snippet from the Linda Lindas’ concert on Thursday and simply stated, “Don’t mess with The Linda Lindas,” leaving the music to speak for itself. When you click on the video, you’ll see the band—Lucia, 14; Eloise, 13; Mila, 10; and Bela, 16—getting ready to play a song.

“A little while before we went into lockdown, a boy in my class came up to me and said that his dad told him to stay away from Chinese people,” Mila, the band’s drummer, explained. “After I told him that I was Chinese, he backed away from me. Eloise and I wrote this song based on that experience.”

“So this is about him and all of the other racist, sexist boys in this world,” Eloise added before launching into the song.

While the Linda Lindas might not have an audience apart from the LAPL’s employees who might be in the room, they don’t tone down their performance as they tear down all of the racist, sexist boys of the world and make insults like “Blockhead” and “Riffraff” cut that much deeper.

It’s not the first time.

They went viral a couple of years ago for their cover of Bikini Kill’s “Rebel Girl,” which led to them opening up for Bikini Kill at the Hollywood Palladium in Los Angeles. Amy Poehler happened to be at that show, which eventually resulted in the Linda Lindas performing a couple of songs in Poehler’s movie Moxie.

The Linda Lindas also wrote “Claudia Kishi” for the Netflix documentary short The Claudia Kishi Club, which explored the legacy of one of the Baby-Sitters Club’s most impactful characters.

The Linda Lindas’ performance was praised by Bikini Kills’ Kathleen Hanna while Rage Against the Machine’s Tom Morello called “Racist, Sexist Boy” the “Song of the day.”

Watch the full concert below.