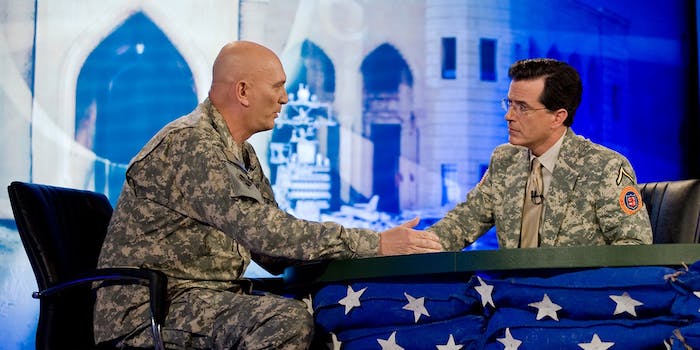 In a showstopper of a final episode Thursday night, America’s most popular faux conservative, Stephen Colbert, bid adieu to his much beloved satirical news program, so he could begin preparing for his new gig on Late Night.

Where do we go from here? What will the world look like without the character of “Stephen Colbert?” It’s hard to imagine right now, but before we try, let’s take a moment back to reflect on the way Colbert and his zeitgeist-capturing show changed modern politics and pop culture.

1) He pointed out the absurdity of modern politics.

This is Colbert’s biggest, and most obvious contribution to the world we live in today. From the time Tom Delay mistook him for a supporter to the Rally to Restore Sanity/Fear with Jon Stewart and his “Americans for a Better Tomorrow” Super PAC—Colbert was the comedic embodiment of everything wrong with American politics and political discourse over the last decade.

It was revealed recently that watching Colbert actually makes conservatives more conservative, and it’s interesting to compare this to previous reports that indicate conservatives don’t know he s joking. Either way, however, you end up with a voice who perfectly captures the ridiculous polarization of comtemoprary politics.

Over the past decade, a lot has been said about how Colbert’s character is an exaggerated version of Bill O’Reilly. But perhaps the most interesting question about his time on the Report is whether he was really that exaggerated at all.

2) He demonstrated the power of social media.

Colbert’s segments have never exactly been famous for going viral, but his impact on social media is not to be underestimated. He was even given the first ever “Golden Tweet Award” for commenting on the gulf oil spill, proving that his influence spanned far and wide across the entire media landscape (his character’s favorite website was even Wikipedia).

In a less flattering incident, he also caught flack when The Colbert Report’s official Twitter account made a satirical comment about Asian Americans which was not well-received, prompting the brief fury that was #CancelColbert.

The controversy was an important moment for Colbert, though, as it illustrated the way he had transcended being a mere entertainer into becoming a cultural focal point. He didn’t even write the tweet, after all, but the attention it gained opened up a larger conversation about white humorists and whether shows like The Colbert Report actually exploit the system they are making fun of.

It’s no secret that The Daily Show and The Colbert Report appeal to younger viewers. However, data from the 2012 Presidential Election also suggested that Stewart and Colbert were popular with various pockets of swing-voters across America.

Whether they had any actual impact on the election is likely unquantifiable, but it’s still worth noting that as America was preparing to go to the polls, many of the most crucial real life voters were being informed by fake newsmen. Moreover, this may not have been such a bad thing, since a Pew Research study that came out back in 2007 indicated that Stewart and Colbert’s viewers were among the most well-informed in the country.

4) He blended the line between “smart” and “funny.”

It isn’t a stretch to call Stephen Colbert a smart guy, and not just because he reads a lot of Tolkien.

By now, we’ve seen how what has been dubbed “the Colbert effect” has swept across academia, prompting a surplus of scholarly articles about the man and his show, and what they say about the times we live in. This is because Colbert’s humor never aims to be easy. Sure, it aims to be funny, as all humor should first and foremost. However, Colbert’s Inception-level version of satire is also the kind of smart comedy that naturally attracts smart people.

This was so refreshing not because “dumb comedy” doesn’t have its place too, but because frequently, the most important topics are also the ones that are worth joking about.

5) He showed us how powerful one character can be.

Another of Colbert’s biggest strengths was that he almost never broke character, and his commitment to the persona he adopted made his impact that much greater. Take his campaign to save speedskating. Or his war with Amazon. Or his push for a Senate appointment. Or his monologue at the White House Correspondents Dinner.

Throughout all these moments, it was Colbert’s unwillingness to blink that made his antics so bewitching. In the end, by never being himself, he managed to elevate the integrity of everything he did.

It’s not exactly as if satire was dying when The Colbert Report premiered in 2005. The Daily Show was going strong. South Park was in its ninth season. The Onion was well on its way to being the fake news powerhouse it is today.

But Colbert took it a step further. All of a sudden, satire wasn’t just about holding up a mirror, it was about becoming the mirror itself. Colbert became what he was reflecting, and through his gleefully pompous rants and condemnations, it became impossible not only to laugh, but to reckon with what America was turning into. The whole thing was both incredibly intoxicating and kind of scary.

Colbert’s powerful contribution didn’t go unnoticed either. The series won six Emmys and a Peabody during its time on the air, Entertainment Weekly named it the best show of the year in 2008, and the Writers Guild of American ranked it as the 50th best-written television program of all time.

With American satire in an interesting place right now, Colbert’s absence is surely going to be felt deeply. Not that there won’t still be other great options out there (fellow Daily Show alum John Oliver is kind of killing it right now). But we may never experience anything again like the thrill of tuning in and hearing Colbert say, “Nation…” before stealthily launching into speech taking those who inspired his character to task.

7) He cared about what he was doing.

Make no mistake, if Stephen Colbert had decided to become a fake conservative just to make fun of actual conservatives, his show would’ve been a rather cynical exercise. But The Colbert Report was always about more than that. You can’t be a great satirist without have a passion that extends beyond “What that person or group is doing over there is stupid.” At a certain point, you have to also stand for something.

Take one of the few occasions when Colbert broke character, testifying before a House committee on migrant workers. When asked by Representative Judy Chu of California why he picked this particular issue to take a stand on, he wisely stated, “I like talking about people who don’t have any power.” This was not part of the “Stephen Colbert” you watch on TV every night. This was simply a guy with a little power himself, speaking out about what he thought was a serious issue.

Did he deserve a medal for it? No, but fortunately, that same sincerity was what always helped underpin the righteous gimmickry and pontificating that made up his show.

In an interesting conversation with NPR, Colbert revealed that playing a character was what helped him to cement his own political ideology. “When I got to The Daily Show, they asked me to have a political opinion,” said Colbert. “It turned out that I had one, but I didn’t realize quite how liberal I was until I was asked to make passionate comedic choices as opposed to necessarily successful comedic choices.”

Up through his last show, it was that passion that made Stephen Colbert the character, and the man, so entertaining and so important. So even if we don’t get another comedic force like him for years, let’s just be grateful we got his insightful, bloviating, deeply resonant take on America in the decade we had it.