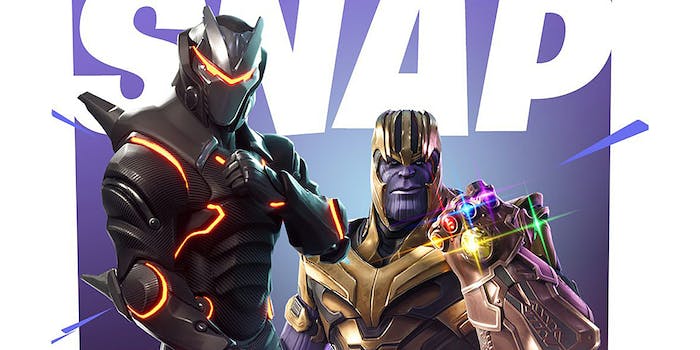 Thanos is teaming up with ‘Fortnite Battle Royale’

The Mad Titan's ready for a fight.

After wreaking havoc on the Marvel Cinematic Universe, Thanos has set his sights on Fortnite.

The Mad Titan is heading over to Fortnite Battle Royale for a new mode called “Infinity Gauntlet Limited Time Mashup” starting May 8. With the new mode, the 100 players who enter the map and fight one another until one player remains will now include a fully bejeweled Infinity Gauntlet.

The promise of Thanos’ gauntlet is a powerful one. The gauntlet will appear on the map and if you’re lucky enough to get your hands on it, you’ll turn into Thanos and wield “all the power that comes with him.” That power is left unspecified, but it could possibly mean anything from harnessing the powers of any of the six Infinity Stones to Thanos’ ultimate goal of destroying half the universe—or in this case, maybe destroying half the players.

Like the MCU itself, Thanos’ descent onto Battle Royale will likely shake up the game in immeasurable ways. But bringing Thanos to Battle Royale had a much simpler path than 10 years of weaving together a cinematic universe: Avengers: Infinity War directors Joe and Anthony Russo were huge fans of Fortnite and reached out to Epic Games’ worldwide creative director, Donald Mustard, about mashing up the two properties.

“Out of the blue, I get this call from Joe,” Mustard explained. “And after a bit of geeking out over each other’s work, we start brainstorming these crazy ideas. It was really important that whatever we did, it had to be super authentic to both Fortnite and the Avengers: Infinity War, and something that fans of both would be excited about. About an hour later, we had the bones of this awesome idea for a limited time gameplay mode, and almost immediately our team got started.”

The “Infinity Gauntlet Limited Time Mashup” will start May 8 and be free to play on PlayStation 4, Xbox One, PC, and iOS.