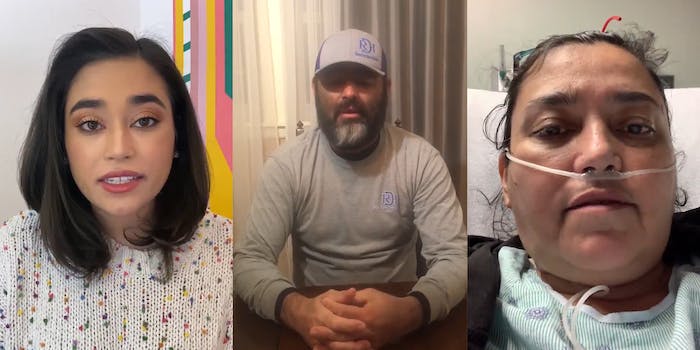 'We feel guilty for gathering.'

Members of a family in Arlington, Texas are imploring the public to stay home for Thanksgiving after a family birthday celebration ended with 15 attendees suffering from COVID-19.

Even though all members of the family who attended the party took every precaution beforehand—social distancing, mask-wearing, and only leaving the house for essential reasons like work—at least one attendee had already contracted the virus beforehand. And while the partygoers maintained a degree of social distancing during the party, by the end of it everyone was infected and went on to pass the virus on to another three family members before anyone involved started to show symptoms.

Fortunately, only one member of the family needed hospitalization, 57-year-old Enriqueta Aragonez, who was first admitted with pneumonia, then released and readmitted later as she developed additional trouble breathing.

Enriqueta’s daughter, Alexa Aragonez, who was unable to attend the gathering and tested negative for the virus, works for the city of Arlington in its communications department. It was her idea to produce the video, using their family’s experience to reach out to other families, especially within Spanish-speaking communities, to discourage them from making the same mistake.

Positive cases of COVID-19 in North Texas have now reached record levels, and while the governor has ruled out another lockdown, local government officials are asking people to cancel their Thanksgiving celebrations in an attempt to slow the spread of the virus. In recent months, people have been holding smaller gatherings, often taking additional precautions like self-isolating beforehand, in an attempt to avoid infection while still seeing friends. However, the CDC has said that these gatherings are responsible for the recent surge of cases and are asking people to hold them outside while remaining six feet apart at all times if they must hold them at all.

While Enriqueta is now at home and out of danger, she’s still suffering from the after-effects of COVID-19, including exhaustion, pain while breathing, and a continued loss of her sense of smell. According to her daughter Alexa, this was one of the reasons her family was so keen to make the video, despite the negative attention it was sure to get them. Speaking to the Star-Telegram she said, “When we took my mom to the hospital, our hearts broke. We feel guilty for gathering… Not everyone is as lucky as my family has been.”