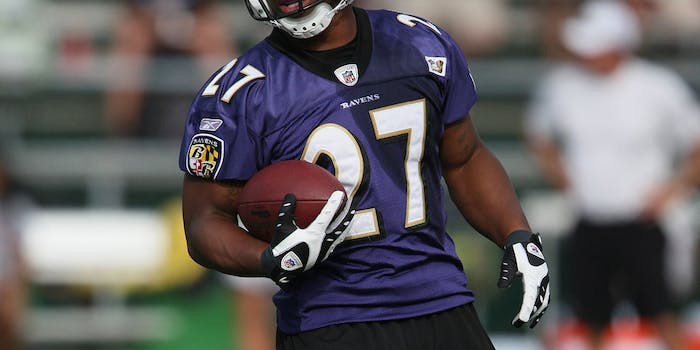 The year in viral sports memories is one that took place off the field.

For sports fans who enjoy the purity of the game and consider the court and playing field a sanctuary away from life’s shortcomings, 2014 was a crummy year. More than game heroics, the big moments—the ones future generations will look back and examine—will be marked with violence, hatred, and sadness.

Save for a cute Super Bowl commercial, some unexpected sportsmanship, and the end of a great baseball career, the most shared videos of 2014 feature more villains than heroes.

Without further adieu, the 10 top viral moments in sports the year.

Sadly, many of the year’s top moments happened off the court or field. TMZ, which made a name for itself in 2014 for breaking some sad-but-true sports-related stories got its hands on a tape shot at an Atlantic City casino where former Baltimore Ravens running back Ray Rice knocked out his then-girlfriend, now wife, Janay. The startling, unnerving clip was the shot heard round the world and led to Rice’s suspension, a fumbled investigation by the NFL, and serious discussions related to the rising number of domestic abuse cases in pro football.

Another TMZ scoop came in the form of a tape in which (now former) Los Angeles Clippers Donald Sterling lectured his then-girlfriend V. Stiviano in a crazy rant laced with a number of racist remarks aimed at players and fans. Sterling was forced to sell the team, with Microsoft’s Steve Ballmer taking over as owner.

On a nationally televised Sunday night baseball game in April, between the Red Sox and Yankees, ESPN’s cameras caught a fan sleeping in the stands. Announcers Dan Schulman and John Kruk had a field day with a number of zingers about the man’s ability to sleep through anything and the likelihood he would wake up with a stiff neck the next day.

Mr. Sandman turned out to be Andrew Robert Rector who sued ESPN, Major League Baseball, and perhaps the ushers for $10 million in damages. Honestly, all he wanted was a pillow.

One of the more memorable moments of the 2014 World Cup was James Rodriguez’s importable goal for Columbia against Uruguay which took his team to the quarterfinals. The gifted attacking midfielder was nominated for FIFA’s FIFA Puskas Award 2014 which is given to the player who scores the goal of the year. The summer highlight reel prompted a blockbuster, million-dollar move to Spanish giant, Real Madrid, shortly after the World Cup.

As reported in the Daily Dot, during the Nov. 29 matchup between Ohio State and Michigan the Wolverines’ Devin Gardner knelt next to Ohio State’s quarterback J.T. Barrett after the Buckeye suffered a season-ending ankle injury. In interviews after the game, Gardner said he and Barrett had a close bond, with each thinking of the other as a brother. Gardner was rewarded with a letter of thanks from Ohio State.

Yankee shortstop Derek Jeter ended his 20-year future Hall of Fame career in fitting fashion. Coming up in the ninth against the Baltimore Orioles, the Yankee captain delivered a walk-off, game-winning single to right field.

The entire season—which was an up and down affair for the Bombers—was a victory lap for Jeter as he was showered with praise, standing o’s and (often strange) gifts as thanks for his service to the game.

No matter what Keith Olbermann says about Jeter’s personal accomplishments, his class and leadership made his a great player and a Yankee icon on and off the field.

LeBron James proved you can go home again. At least if you are a four-time NBA Most Valuable player. In July, James announced he would be returning “home” to play for the Cleveland Cavaliers—the team that drafted him first overall in 2003. James would later be joined by ex-Timberwolves star Kevin Love.

As of the end of December, the Cavs are off to a mediocre 16-10 start and have a long way to go to bring the Larry O’Brien trophy home to Cleveland

In the wake of the civil unrest that resulted from the police shootings in Ferguson, Mo., and New York, a number of athletes from the NFL and NBA spoke out—not in words, but by donning T-shirts that spoke to their sadness and demand for justice.

As they entered the playing field for their game against the Oakland Raiders, St. Louis Rams players Tavon Austin, Jared Cook, Kenny Britt, Stedman Bailey, and Chris Givens took the “hands, up, don’t shoot” pose as a display of protest of the shooting death of Michael Brown.

Needless to say, area law enforcement was not happy about the display, but the NFL took no action against the five Rams players.

Hawkins addressed reporters two days after the game with a thoughtful explanation as to why he felt the need to draw national attention to the plight of young African-Americans.

The mouth that roared

The phrase “it ain’t bragging if you can back it up” has been attributed to Muhammad Ali and even Kid Rock (ugh), but it was Dizzy Dean, the former St. Louis Cardinals pitcher, who actually minted that coin.

Seattle Seahawks cornerback Richard Sherman is the latest athlete to put himself in that “I am the greatest” spotlight. In the 2013-2014 NFC playoffs against the San Francisco 49ers, Sherman’s last-minute heroics as he tipped a ball away from intended receiver Michael Crabtree led to an outburst of unabashed self-praise, and loathing aimed as his opponent.

In a postgame live interview with Fox’s Erin Andrews, Sherman was asked to go through the steps of that defensive gem. Instead, the former Stanford standout went on a rant in which he scolded Crabtree for talking about him with some incoherent missives tossed in for good measure.

Yes, he is that good.

Super Bowl XLVIII was a dud. The Seahawks whooped up on the Denver Broncos 43-8 making Bronco’s quarterback Peyton Manning look like the 38-year-old former gunslinger who should be ready for retirement. The game was never in doubt.

The weak game put greater emphasis on those often-great TV commercials that play during time outs and other breaks in the action. Virally speaking, the Budweiser spot that touchingly presented the bond between a dog and his equine friend drew the attention of millions of viewers and more than 54 million YouTube fans.