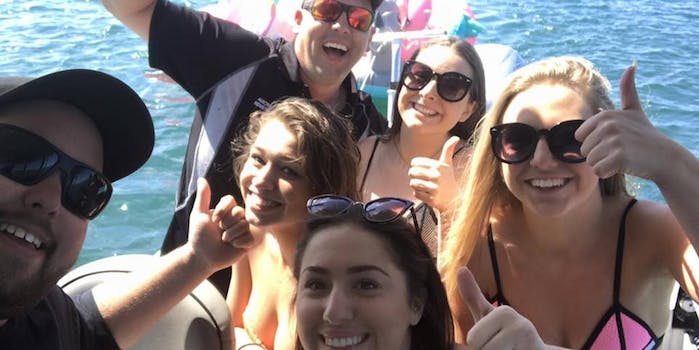 Teens rescued after drifting into shark-infested waters on inflatable flamingos

They were trying to take the perfect Instagram photo.

Four girls on spring break in Australia had to be rescued after their quest for the perfect Instagram photo took an unexpected turn.

The teens were floating on two inflatable flamingos, a unicorn, and a dinosaur on Phillip Island in Victoria when the tide and wind pushed them about a quarter-mile off shore and into what locals described as shark-infested waters.

“We just wanted to get a few good Instagram pictures, and it turned out we drifted nearly all the way to the other island,” one of the girls told The Project.

The four were pretty much helpless until they were discovered by some local squid fisherman, who used their lines to pull the girls (and their floaties) into their boat.

7 News Melbourne has the full report:

Four schoolies have been rescued after drifting almost half a kilometre out to sea on inflatable animals. #7News https://t.co/QmEfGDYi4J

There’s a lesson to be learned in here somewhere, but it was apparently lost on the four girls. Locals reported seeing them hit the water again right after being brought back on shore.

It’s spring break, after all.