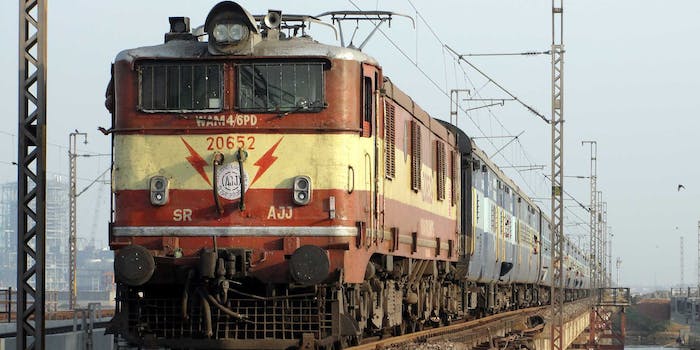 Another teen dies in a quest for the most daring selfie

Risk-taking in the search for daring selfies looks to be on the rise.

Karl Marx famously wrote that “history repeats itself, first as tragedy, then as farce.”

But over the last month, the converse was proved true—as what began as farce descended into tragedy.

Jared Frank is a Canadian kid, who, stupidly, decided to try and take a video selfie by some train tracks in Peru. The conductor of the oncoming train—irate at Frank’s behaviour, and potentially trying to get him out of the way of the train—booted him in the side of the head. It was all immortalised on video, uploaded to YouTube, and now Frank could stand to gain as much as a quarter of a million dollars in video licensing revenues as a result of his foolishness.

Yesterday in the Indian state of Kerala, a 15-year old boy posed to take a selfie on the tracks in front of an oncoming train. The boy, identified in news reports only as “Edwin”, had “wanted to have a selfie with an approaching train in the background to post on social media,” Gulfnews.com reports.

However, Edwin failed to get off the tracks in time, and was hit by the speeding train. He was killed instantly.

Risk-taking in the search for daring selfies and videos is looks to be on the increase, with a Russian teen falling 30 feet to her death from a St. Petersberg railway bridge last month.

But the rewards for success are alluring, with thrillseekers often racking up hundreds of thousands of views and likes for their videos—as was the case of the Russians who climbed the 850-meter Shanghai Tower, the world’s second-tallest building, without any ropes or safety equipment.

In yet another worrying indicator of the lengths that people will go to for social media fame, Gulfnews.com reports that a second incident also occurred on Wednesday, in which a 32-year-old called Abhilash tried to record a video of himself in a mock hanging to post on social media.

Despite having done it before—and being reprimanded for it—this time something went wrong, and Abhilash was killed.