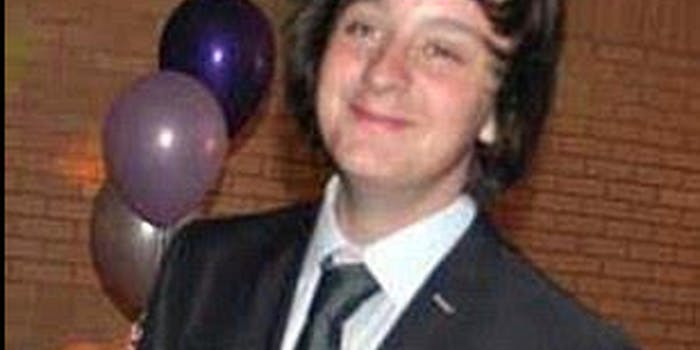 Jay Whiston, 17, was stabbed in the abdomen at a party Saturday following an argument about a friend’s cell phone.

British police are investigating why a teenage boy was stabbed to death after a party advertised on Facebook spiralled out of control.

Jay Whiston, 17, was stabbed in the abdomen at a party Saturday following an argument about a friend’s cell phone. A Facebook invite had been sent out to around 100 people, but the party’s attendance doubled with uninvited guests as the event spread through the social networking site.

The party took place at a lavish mansion in the affluent Essex neighborhood of Colchester, an hour east of London. Witnesses say Whiston was defending younger partygoers from being  bullied about a cell phone when an unknown person stabbed him. He was taken to the hospital but was pronounced dead shortly after arriving.

Two 17-year-olds and two 18-year-olds, all male, are being questioned by Essex police on suspicion of murder.

The party was supervised by the the host’s parents, who reportedly told neighbors in advance of any trouble it could cause. According to numerous U.K. media reports, the party started out as a quiet event but grew louder as the night went on as people heard about it through Facebook.

The fight between Whiston and another unidentified boy started around 10pm when someone shouted the word “fight!”

“It was two boys on the patio at first but then others joined in,” witness Shannon Summers told the Daily Mirror. “When the ambulance came, he was just lying there doing nothing.”

A Facebook group, titled RIP Jay Whiston and created Monday, has garnered more than 1,000 likes and is quickly growing with notes of remembrance. The Twitter hashtag #RIPJay has also collected more than 700 tweets, according to social analytics tool Topsy.

“[My] heart goes out to the mother of this lovely young man, absoulutely (sp) terrible,” commented Nicky Edwards on the Facebook page. “Hope you rest in peace with the angels sweetheart.”

Many British publications are labeling the event as a murder at a “Facebook party,” but the site is distancing itself from the event.

“It is not Facebook that is to blame, it is the people who turned up at the party,” a spokesman told the Telegraph.