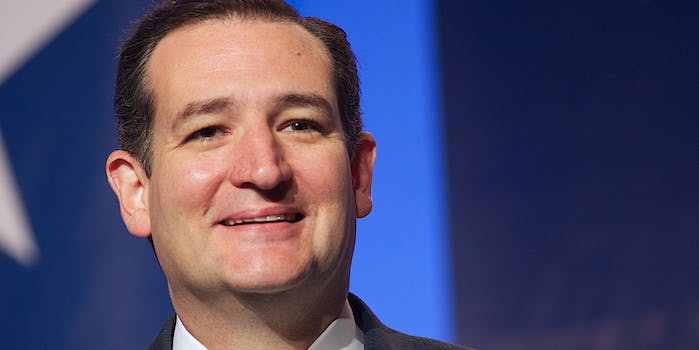 Some much-needed relaxation for the devil.

What’s the best way to get over a humiliating presidential race? Some TLC south of the border.

GOP dropout Ted Cruz was spotted by Laura Turner at a hotel pool in Mexico over the weekend. Looks like even “Lucifer in the flesh” needed some relaxation, especially after his major political flop.

Now, it’s a little difficult to make out Cruz’s “hard to look at” face, so we’re going to have to trust Turner that it was indeed him frolicking at the pool. And honestly, this figure, in all its escapist circumstances, exudes so much Cruz-ness it seems legit. We can imagine him trying to shake off the frustration of getting beat by a reality-television star by sipping some piña coladas poolside.

And while many are joking about moving to Canada if Trump does get elected, Cruz knows that the country just a bit south of Texas is the superior out-of-the-U.S. getaway. Why go for Canada’s maple syrup when there’s better food and weather in Mexico?

Turner also writes that as much as she doesn’t like Cruz, she hopes that he’s well-rested. But, does the man who fraternizes with a bunch of racists and homophobes deserve some recovery time? I’m thinking, nah. His family might, but we’re hoping that he’s swimming through someone’s piss in that pool.