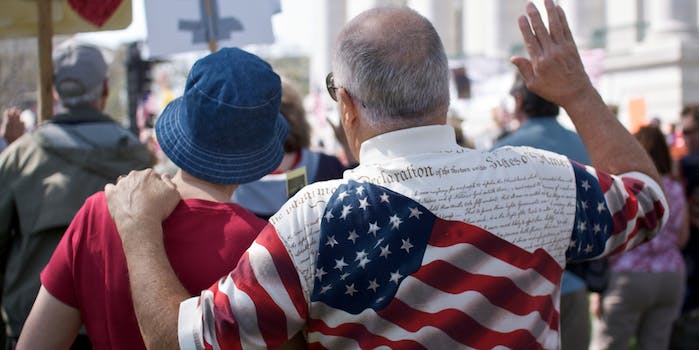 Leave the outrage to the pros.

The Tea Party loyal are, by their own admission, a pissed-off bunch—and the Internet is awash in the movement’s anger. They’re mad at Obama, mad at the Republicans who have failed thus far to impeach him, mad that “their” country does not currently conform to some fever dream of what it “used to” be like.

With the government reopen for business and Obamacare still not repealed, the Tea Partiers are more outraged than ever, with the result that Speaker of the House John Boehner’s Facebook page, for example, has been overrun with fringe conservative vitriol, content that is in turn borrowed to fuel your new favorite online service: the Tea Party Insult Generator.

Struggling with how to characterize Boehner? Hit “Refresh” a few times and you’ll see that he’s a “caving big government commie,” an “idiot Breitbart-betraying turncoat,” a “spineless Democrat-loving socialist,” and even a “double-crossing dickhead Marxist.”

Over time, of course, certain themes start to emerge—no doubt due in part to the tendency of Tea Partiers to copy-paste diatribes from elsewhere on the Web when they feel a like-minded patriot has made their point for them. Thus, you get a lot of “RINO,” or ‘Republican in name only” accusations, varying forms of treason, and all the beloved code terms usually reserved for progressive Democrats, from “freedom-hating devil” to “Muslim-loving devil” to “yellow-bellied Benghazi-denying devil.” Overall, devils are a big concern.

So what are you waiting for? Figure out which of your friends is a “fascist libtard,” whatever that is, and give it to them with both barrels, secure in the knowledge that your next razor-edged political put-down is just a click away. In fact, I wouldn’t be surprised if members of Congress relied on this site in the next filibuster. Anything so we don’t have to hear Ted Cruz miss the point of a Dr. Seuss book again.