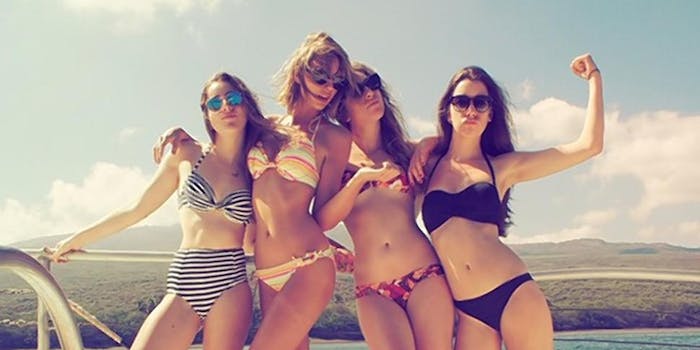 There's something rotten in Denmark.

Of course, this wasn’t the first time Swift has thrown the most enviable—or enviably Instagrammed—gathering of the moment. There was her Christmas party, exchanging twee cards with Hollywood starlet Hailee Steinfeld. There was her birthday party where she went drinking with Beyoncé, Jay-Z, Justin Timberlake, and Sam Smith. And of course, there was last Fourth of July’s “family photo,” with close relatives Lena Dunham, Emma Stone, Jamie King, Ingrid Michaelson, and other assorted attractive associates.

So this is being 25….. #WHAT #bestbirthdayEVER

But somehow this year, with a series of Independence Day ‘grams from her Rhode Island beachfront mansion bash, Taylor Swift outdid herself and, like she always does, everyone else.

There was Swift, along with close friends like supermodel Gigi Hadid and the members of the band HAIM, leaping in perfect unison, wrapped in lush American Flag beach towels. There was Swift, being just the right amount of adorkable while playing stars and stripes with pop star Ed Sheeran. There was Empire actress Serayah, traipsing across Swift’s beautifully manicured lawn in her bikini. And there was Swift again, piggybacking on the sculpted shoulders of her newest beau, Calvin Harris, recently named the highest paid DJ in the world.

But this expert framing of her perfect pool party was curious when juxtaposed with a message to the audience during the East Rutherford, New Jersey stop of her massive 1989 World Tour the following weekend. There, she preached to her audience, made up primarily of pre-teen girls in braces, about the dangers of Instagram. “If you’re feeling down about yourself, don’t look at Instagram,” Swift bellowed to 60,000 devotees, floating over us on a massive elevated runway. “Instagram is nothing but a highlight reel.”

While discouraging her young fans from comparing themselves to others on social media was ostensibly the right message for Swift to be sending, the way she presents herself through these channels makes that directive seem flagrantly disingenuous. Had not every single person in that stadium spent the previous weekend covetously glued to her Independence Day Instagram follies? And wasn’t drawing jealous eyeballs to a golden-hued version of her life her—as well as most other people’s—intention on Instagram?

The reality is that Swift’s shrewd representation of her star-studded barbecue—her acute media acumen and the role that plays in her brand— handily took precedence over her warning about the dangers of comparing yourself to other people on social media at the 1989 Tour that night.

In many respects, Instagram is a game, although a slightly deranged one, and Taylor Swift is the winner. Each post on her feed shows a pop superstar living her life on an epic scale, filling stadiums and performing with every hot musician du-jour, cutting remixes with the biggest rappers of her day and maxin’ out with her fellow elite celebrities in lovely settings, all cannily filtered to make the extraordinary seem just-down to earth. It’s also a shiny veneer with few cracks; Swift has proven equally adept at creating her image on Instagram as she is in her clever and considered lyrics.

And it’s been an equally successful tactic, to boot. With 38.8 million followers, she is the fourth most-followed person on the app. The post of her on Harris’ back racked up 2.3 million likes and comments like “omg I wish I was as skinny as this,” and “Calvin is sooo hot!!! You are so lucky!” If you win Instagram by appearing to have the coolest life, Swift is a champion of the highest order.

Even before Instagram was a thing, though, Swift had always used fan interest in her personal exploits to fuel her pop stardom. Before the current #SquadGoals Era, speculation about who she was dating and even her relationship with her family had been a huge part of the Taylor Swift Brand, a lynch-pin in her success.

Songs like the one titled “Dear John,” about the demise of her relationship with John Mayer, nicely bridged tabloid speculation about her personal life with record sales. And even when she wasn’t stating it explicitly, Swift has always been savvy at dropping not-so-subtle hints about which celebrity romance she was referencing in any given tune.  After her performance of her hit 2012 single, “I Knew Your Were Trouble” at the BRIT Awards, Swift affirmed, “It’s not hard to access that emotion when the person the song is directed at is standing by the side of the stage watching.” Her ex, One Direction’s Harry Styles, had been an audience member that night.

So while running a #blessed Instagram account is a natural extension of what she’s always done, her admonition in Jersey also belied the fact that Swift is well-aware of how beaming images of perfection can make others, especially the young girls who have made her wealthy, feel like shit. And she’s totally right. A recent study from Carnegie Mellon University proved a direct link between the amount a person browses social media and feelings of depression.

In fact, Instagram is perhaps the worst social media platform when it comes to generating FOMO. In an interview with Slate’s Jessica Winters, Hanna Krasnova of Humboldt University in Berlin, who conducted a study on the subject, explained of the picture-sharing app, “You get more explicit and implicit cues of people being happy, rich, and successful from a photo than from a status update. A photo can very powerfully provoke immediate social comparison, and that can trigger feelings of inferiority.” Indeed, “happy,” “rich,” and “successful” jump right to mind when browsing Swift’s feed.

And yet, despite her Instagram creed, many features of the 1989 show itself were predicated on the idea that you follow Swift and her friend clique closely—and rightfully so. Met with cheers at our show were many recurring stars from Swift’s account, including Heidi Klum, Dunham, Hadid, Steinfeld, Lily Aldridge, the Weeknd, and the American women’s soccer team.

Notably, none of the members of Swift’s crew trotted out during the performance are musicians, save for the Weeknd. The rest appeared merely as Instagram effigies come to life, there to represent an unspoken agreement that if you’re at the 1989 World Tour, you know who Taylor Swift hangs out with. It’s the only possible justification for having Lena Dunham appear during a pop concert.

Moreover, the fact that these friends arrived mere moments after Swift encouraged her fans not to compare their lives to others threw a giant, glittery ninja star right in guts of her status as a role model. What the 1989 show really announced, despite words to the contrary, is that Taylor Swift doesn’t want us to avoid Instagram to feel better about ourselves at all, and the evidence of this strutted down the catwalk that night. Our looking at, loving, and envying Taylor Swift’s Instagram is a crucial building block not only in her entire career, but of the very show we were halfway through when she told us not to look at Instagram.

When I walked out of the show later that night, which—despite the flaws in her message—was fantastic, I started to think of the ways that Swift might really be the role model she aspires to be and affect real change, at least when it comes to Instagram. She could pepper her prettier posts with ones of herself looking imperfect and talk about how even she, the biggest star in the world, has her struggles and her bad days (she does have bad days, right?). She could even delete the app all together and let her music do the work.

The rest appeared merely as Instagram effigies come to life, there to represent an unspoken agreement that if you’re at the 1989 World Tour, you know who Taylor Swift hangs out with.

But it could even be simpler than that. It could even have been her, during her speech at the show, personalizing the message. “I too sometimes find myself looking at other people’s Instagrams and feeling like garbage,” she could have said. “And don’t believe mine either. Those are just the good times.” That would have been magic to the ears of everyone in that stadium, many of whom, as these studies have shown, suffer deeply at the hands of the image-based culture our social media obsession generates. Many these fans look to her as a guiding force.

Drawing attention to the strings that pull her social media puppetry is incredibly important. Later in her piece, Winters interviews University of Wisconsin-Madison professor Catalina Toma. Toma explains that most people assume that while we ourselves sort through hundred of pictures for our own social media, choosing just the right one to post on Instagram, most also believe that others don’t work nearly as hard to achieve perfection. She says this leads to an even “more distorted perception that their lives are happier and more meaningful than yours.”

Why do people look up to Taylor Swift? Precisely because they desire the image she’s selling—rather, they want her life. Instead of continuing to buy into the social media perfection ideal, Taylor Swift needs to use her influence to help combat it. But as things stood in East Rutherford that night, what Swift left us with in terms of a role model was an empty, karaoke version of one, one who talks the talk but doesn’t really walk the walk.

Albeit one who also, at least by the looks of it, knows her way around a raging Fourth of July party.

Louie XIV is a DJ, producer and writer who was born and raised in New York City. He spins regularly at many of New York City’s premiere venues and clubs including Boom Boom Room, Gold Bar, Le Baron, The DL and Hotel Chantelle. He has been profiled in the New York Times, Time Out New York, and other major publications.