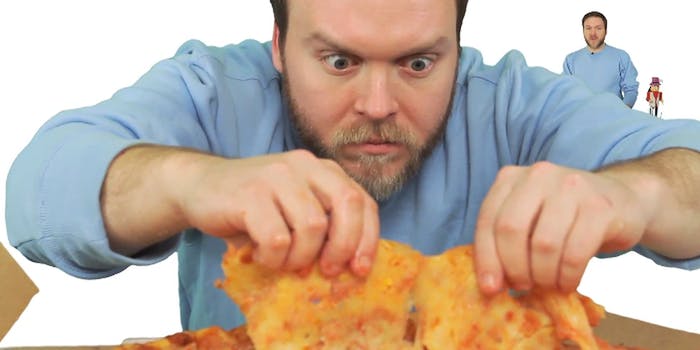 Taylor Moore awkwardly shows you how to “Sex Your Food”

"This is just a weirdo sticking his fingers into mac and cheese."

When you combine two of the main things that the Internet is known for—sex and food—you’ll end up with massive cravings for dishes you probably can’t cook but look amazing.

But when you add YouTube tutorials to the mix, you end up with “Sex Your Food.”

The channel’s premise is that all food has a sex, and it’s up to the star of the show, portrayed by Taylor Moore, to teach us all just how to determine whether our food is male or female.

Some of the solutions are straightforward: just insert your fingers into the food and the texture will tell you what you need to know; sometimes trying to discern the sex of a food or drink turns out messier than one might have anticipated.

“So it started as a sort of joke on the guy making the videos,” Moore, a podcaster from Brooklyn who is a “sassy butler” by day, told the Daily Dot. “Foods don’t have a sex as he means it. This is just a weirdo sticking his fingers into mac and cheese.”

Once he gets to more complicated dishes, however, it’s not as simple.

“Sex Your Food” soon evolved to exist in a world where every food does in fact have a gender. It’s a world where an entire pizza will have eyes under the cheese and a dish of chicken and a bowl of salad will emerge from its bowl to whisper its gender. The look of the show is partially due to the show’s director and editor Kirk Larsen.

As he makes more videos (he’s currently accepting suggestions for food to sex in season 2) he’s coming up with more creative ways to determine the food’s gender.

His most popular video, which shows him sticking his arm into a cantaloupe, even shocked a live audience at the UCB Theater.

“When my whole arm went in, I heard someone shout ‘Shiiiit!’ which is not a normal thing to hear being shouted out in a theater setting, even at the UCB.”

Moore is a huge fan of video tutorials on YouTube; the idea for “Sex Your Food” came during one of those jumps down the YouTube tutorial K-hole. He especially enjoys the tutorials that feature someone who “maybe [has] no business being in front of a camera.”

His character, who he describes a version of himself stripped of the ability to hide social anxiety and terror, is barely able to string a sentence together because he’s nervous and doesn’t exactly know how to execute the media he’s absorbed, so he ends up with a child’s version of what he tried to make.

“That makes him a kind of failure, but he’s also the kind of failure who clicks ‘publish’ at the end of his failure and makes all that failure public,” Moore said. “I like that. I like this weird guy.”