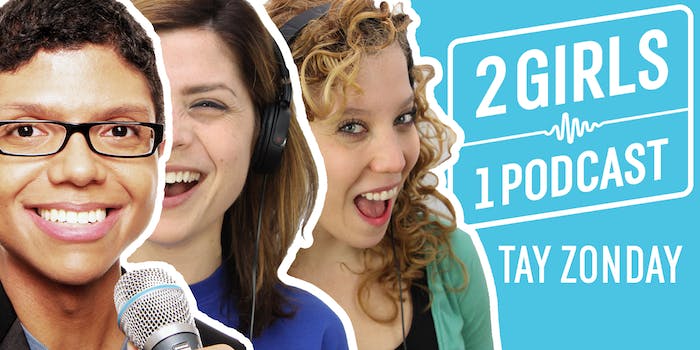 How Tay Zonday survived being ‘Patient Zero’ of viral YouTube

Some stay dry and others feel the pain.

Way back in 2007 (a billion years ago in internet time), a young website called YouTube was finding its footing as a video destination, and the concept of “virality” still had echoes of odd Flash player phenomena like the Numa Numa guy.

Enter Tay Zonday (pseudonym of aspiring singer Adam Bahner), who uploaded the original song “Chocolate Rain” because…well, why not? Then nothing happened.

Then Digg and 4chan found it. And then Zonday was on CNN and Jimmy Kimmel trying to explain his music on national television.

His meteoric rise led to a 10-year journey of identity confusion and eventually self-actualization—an outcome that’s rare for many viral sensations, who get lost in what hordes of anonymous internet commenters perceive them to be, rather than who they truly are.

This week on 2 Girls 1 Podcast, Alli and Jen (actors who perform weird internet stuff on stage) have a long, deep talk with Zonday about viral fame, the evolving culture of YouTube, and his new podcast called Chocolate Pains, which is all about coping with virality and building a sustainable career from it.

And while you’re here, be sure to treat yourself to a little chocolate:

This week’s episode is supported by Penguin Random House Audio, which publishes thousands of award-winning audiobooks every year, including your sci-fi and fantasy favorites like Harry Potter, Game of Thrones, and Hank Green’s novels. Download Penguin Random House Audiobooks wherever you listen to your favorite audiobooks (Audible, Amazon, Barnes & Noble, etc.) or check out this page to browse their latest selection.