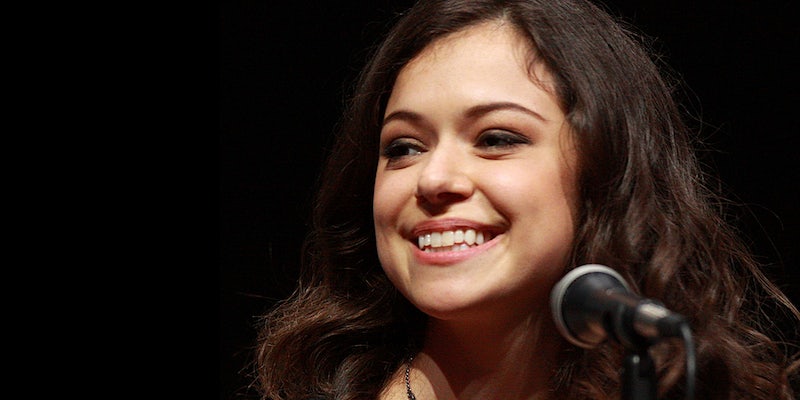 The Orphan Black actress got snubbed again for this year's Emmys, and people aren't happy.

Warning: This article discusses spoilers from the first two seasons of Orphan Black.

About three months ago, I sat in a Manhattan theater with 300 eager fans to watch some television.

We sat in silence with dropped jaws as we watched a con woman search for answers about her murky past, a scientist try to cure her own lethal illness, a housewife struggle to keep it together after allowing her best friend to die, an executive manipulate everyone beneath her, and someone we thought was definitely dead burst into a hospital to defy everything we know, leaving a pool of blood behind. It was only the first episode of the season, and things got even crazier from there.

Have I mentioned that every one of those parts was played by one actress, often at the same time?

Today’s Emmy nominations saw a unprecedented 31 nods for Netflix. President Barack Obama’s Between Two Ferns interview was recognized. But, as usual, most people were talking about who didn’t get nominated. The Emmy snub lists go up almost as soon as we get the list of nominees.

Victim of this year’s biggest snub was Tatiana Maslany, star of BBC America’s sci-fi thriller Orphan Black and one of the hardest-working actresses in television. She’s been nominated for a Golden Globe in a tough category, and she’s won the Critics’ Choice Award for Best Actress in a Drama Series two years in a row. Today, though, the Academy of Television Arts & Sciences chose six other actresses to compete for Best Actress in a Drama Series.

The show put on a smile—although it let pro-clone Rachel Duncan do the talking—but fans and critics more than annoyed at Maslany’s exclusion, yet again. Maslany’s name eventually trended worldwide on Twitter. 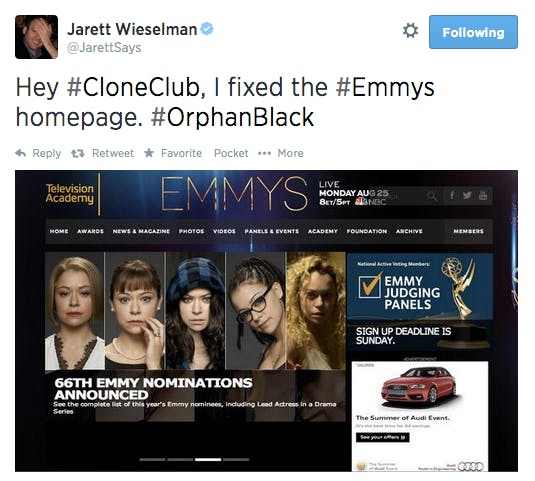 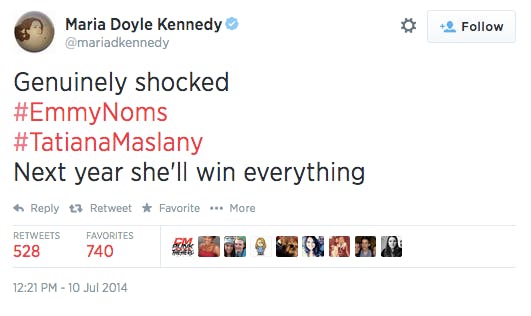 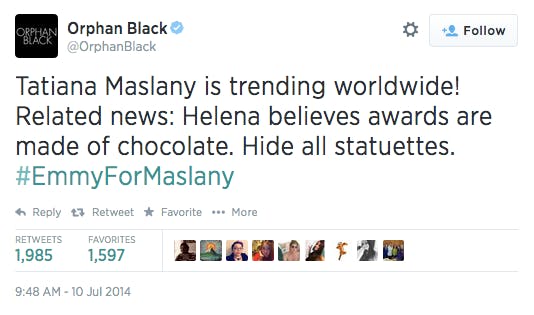 The Emmys shouldn’t even matter, people argue. Look at Buffy the Vampire Slayer and The Wire. Buffy only received two creative arts Emmys (while The Wire only ever received two writing nominations), and they already both have more of a lasting legacy on their fans and our culture than Two and a Half Men ever will.

But yet, they do. We want the excellent television in this “golden age of television” to be rewarded, and what better way (aside from all of the positive validation we can offer through verbal praise, think pieces, and now on Twitter) to show it than a spanking, shiny Emmy?

Maslany shouldn’t just get one nomination. She should get all of them.

If you look back at Emmys past, it’s easy to see why Maslany wasn’t nominated. She’s a previously unknown name on BBC America, a small cable channel not known for original TV. She’s on a genre show (specifically science-fiction), and aside from Game of Thrones and Lost, genre shows have had almost no chances at the Emmys in the last 10 years alone. It doesn’t matter if she’s already won two Critics’ Choice Awards or been nominated for that Golden Globe, the latter which is selected by the Hollywood Foreign Press Association.

Admittedly, she has a lot of tough competition in a category made even tougher with House of Cards as competition. But none of the other actresses nominated (or the other fellow snubs) are doing what Maslany’s doing.

Orphan Black originally started out as a sleeper hit following Doctor Who, and with a third now confirmed, it’s turned into a cultural phenomenon and a fandom to be reckoned with. The conspiracy thriller hit the ground running with a punch hitting as hard as a train did, and it hasn’t stopped since, revealing not one, but eventually two clone programs trying to control the lives of more than a dozen clones (so far). But ask just about anyone about why to watch Orphan Black, and Maslany will be at the tip of their tongue.

If you haven’t already already been welcomed to the trip, chances are somebody has tried to get you on it.

Normally a show will hit what’s known as the “sophomore slump” in its second season, but Orphan Black came back even stronger, and it’s largely thanks to Maslany, who’s often in a scene with one or more clones (aided by acting double Kathryn Alexandre), which calls for shooting the same scene multiple times as all of the characters.

In just 10 episodes, Maslany had to do nearly the impossible, something she accomplished in every episode.

She introduced us to Jennifer Fitzsimmons, a teacher and swim coach suffering from the same respiratory illness that afflicts Cosima Niehaus, who was created as a character solely for the purpose of dying. Yet, in just a few video diary entries, we learn about her life and death, and we feel for her even from the smallest of glimpses.

She had to make the audience believe that bringing back Helena, already a fan favorite, wasn’t just some trick. She died months ago for many of us, and creators Graeme Manson and John Fawcett straight-up lied to everyone’s faces. But with Helena’s charm (and sometimes sociopathic tendencies), it was one of the best decisions this season, even when Helena did some really messed up stuff. (Artificially inseminating the man who did the same to her while she was drugged comes to mind.)

Much of Orphan Black’s comedy comes from housewife and alcoholic Alison Hendrix, and Maslany was tasked with making her fall (both figuratively and literally) and subsequent rise to the occasion of hiding a dead body not seem over-the-top slapstick.

She made us feel sympathy for Rachel when she decides to show a shred of emotion, who was thought to have none due to her personality and having grown up knowing she was a clone. Her reaction when she finds out that her inability to have children wasn’t a flaw, but intentional, is hard to watch.

Orphan Black introduced the audience Tony Sawicki, Orphan Black’s first transclone, and Maslany had to do it without being offensive. Only seen in one episode, he turned into a fan favorite for many as well, although some still had issues with the portrayal and Maslany playing a trans male character.

Any one of those things would’ve been great for an actress to dig her teeth into. Maslany did them all.

Along with being a driving force in just about every plot on the show, Orphan Black wouldn’t be possible without any one of her characters. In most shows on TV, we’d be lucky to see even one of the female characters on Orphan Black (even the ones who aren’t played by Maslany). Instead, we get close to a dozen.

There’s no sexy lamp on this television show.

When TV shows still struggle to paint women as complex characters with sometimes questionable morals (something male characters do constantly), Orphan Black has multiple, and it’s more important than ever in a television season that saw even more sexual violence against women. While much of the characters due to what was in the scripts, Maslany brought them to life. She’s not only doing excellent work, but it’s vital.

When Maslany was snubbed for an Emmy last year, the Clone Club—as the fans are called—started an Indiegogo campaign to give Maslany her own award. The anger may subside as this passes, but for now, fans and critics alike are livid.

An Emmy may not matter in terms of a television legacy, but it sure wouldn’t hurt.