His antics with his new gf are not only juvenile, they're visually hideous. And yet I can't look away.

I have an ex-boyfriend who is in a new relationship. His Instagram is like the worst possible thing that has ever happened to humanity, but I can’t stop looking at it. Help!

The first picture of his new girlfriend was just a photograph of her nostrils. Obviously zero likes. Everyone understands that is not acceptable. But she commented on it, so obviously now I check hers, and she will like post a photo of herself slumped in the back of a car in a Mickey Mouse hat making the international symbol for cunnilingus, and @ him to “eat it.” In the most recent one, she stole his phone, took a photo of herself, and wrote a bunch of comments about how beautiful she is and how much he loves her. THEY HAVE BEEN DATING FOR LIKE NEGATIVE DAYS. Like two weeks. I just want to end this. How do I stop doing this to myself?

Also, he and I talk sometimes. Can I tell him he is horrifying? 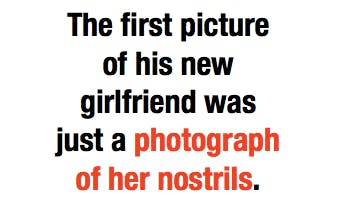 For starters, pat yourself on the back: The fact that he’s the kind of guy who not only puts up with but perpetuates all this 8th-grade tomfoolery means you dodged a bullet. So, hooray! Thank goodness you broke up with him before he could share your nose hairs with the world.

But as triumphant and lucky as you may feel watching him and his crass new flame blithely embarrass themselves, enough is enough, and this is clearly taking up more of your mental energies than you want it to. Unfollow him on Instagram immediately if you haven’t already (you don’t have to tell him you’re going to, but be forthright if he asks— more on this in a second). You can re-follow him in a couple weeks when they break up, or just keep up with him in ways that are more emotionally and visually safe for you.

Back in the day that would have done the trick, but of course all our Instagram feeds are available on the website now. My trick for this is to only open sites I know I shouldn’t be looking at in an incognito window. (I use Chrome; in Firefox they’re called private windows.) The value here is twofold: Nobody else using your computer will know what you’ve been up to, and more importantly, the browser won’t save the URL and autocomplete it for you. (Clear your history first.)

Every time you want to peep, you’ll be forced to type in “http://instagram.com/nostrilgirl” (well, OK, you don’t have to type in HTTP, but try to make yourself), which gives you several precious seconds to think, “Ehhhhhh… I actually don’t want to do this to myself.” Failing that, try post-its all over your laptop that say “COME ON, DO YOU REALLY WANT TO SEE INSIDE A NOSE” and “JUST ASSUME IT’S GROSS.” The trick is just to stop doing it unconsciously, where by the time you’ve had a chance to think twice you’re already looking at whatever new travesty they’ve perpetrated. If you can give yourself time to think, you’ll remember that it’s not going to be any less disturbing next time you check.