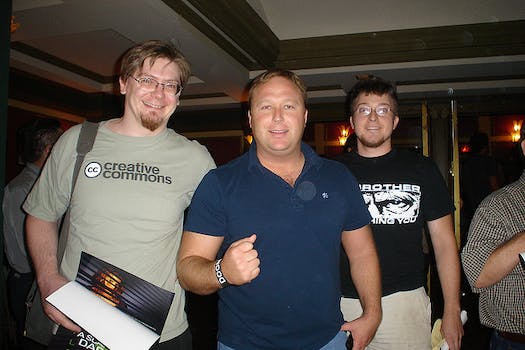 The Texas radio host says the link between his show and the Boston bombing suspect is nothing more than a government ploy.

This is the snake eating itself.

Tamerlan Tsarnaev was a fan of conspiracy theory website InfoWars, according to an Associated Press story that looked into the suspected Boston Marathon bomber’s motives for carrying out the attack.

The AP claims that Tsarnaev’s interest in the site—owned and operated by Texas radio host Alex Jones—began after meeting a mysterious man named Misha. According to family, it was Misha’s influence that led to the now deceased 26-year-old become an Islamic extremist.

It was also because of Misha that Tsarnaev began to believe that the terrorist attacks of Sept. 11, 2001, were actually perpetrated by the United States government. Because Alex Jones has been the biggest peddler of this conspiracy theory, Tsarnaev turned to InfoWars.

That Tsarnaev was a fan of Jones is ironic to say the least. On the day of the bombings, April 15, Jones took to Twitter to state that the tragic events were a false flag. The following day, he made the claim that the animated series Family Guy had predicted the explosions. He and his cohorts also contend that YouTube and Google were trying to censor him when a clip was pulled down from the video sharing site.

For his part, Jones acknowledges that Tsarnaev may have been a listener, but that the link between the two is nothing more than a ploy by the government.

“I’ve seen this before,” Jones told BuzzFeed’s Rosie Gray. “The federal government trying to connect me to tragedies. That’s the media and the government’s own conspiracy theories.”

Jones asserted that he and his show are decidedly anti-terrorist. He also doubled down on the theory that the bombings were executed by the FBI, which necessarily suggests that the Tsarnaev brothers were innocent.

Of course, the radio host never actually proclaims that the two men are blameless. That would be crazy, and Jones is anything but.