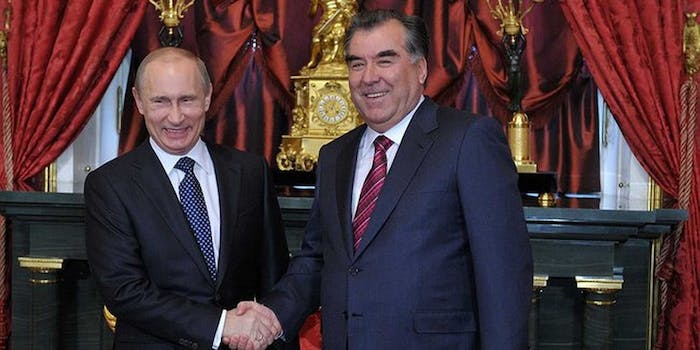 Have you ever karaoked so badly that your country banned YouTube to prevent national embarrassment?

An humiliating video of a singing performance by Tajikistan president Emomali Rahmon, taken in 2007 but put on YouTube in May, is thought to be the reason the country blocked YouTube access for a week.

The block lasted from May 18 to 27, according to a Global Voices report, but it didn’t grab a lot of attention. Perhaps that’s because Tajikistan, a nation of eight million people, only has 2 million Internet users. Or perhaps it’s because the country has blocked YouTube at least three times in the past year.

The country’s Communication Service, which regulates Tajikistan’s Internet service providers, confirmed the ban on the day it was lifted, but refused to elaborate on the reason behind it.

It’s not hard to notice that the ban started just as the video of Rahmon started to go viral, though. Uploaded the day the ban began, the video was promoted on Facebook by Dodojon Atavulloev, a well-known dissident in exile.

Titled “Drunk Tajik President sings a song,” the clip shows Rahmon at his son’s wedding, dancing and singing wildly off-key. Occasionally, the camera cuts to Rahmon’s son and daughter-in-law as they stand stoically.

If the video seems somewhat professional, that’s because it is. It initially aired on the independent TV station K+, whose website was banned during the same period.